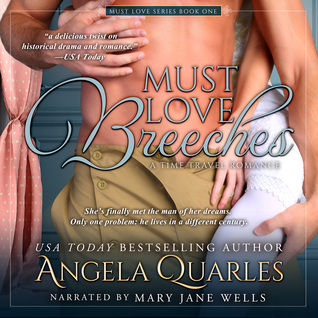 I surprised myself by requesting this book from Audiobookloudnoise.com (kidding – it’s now audiobookboom.com). I mean, I’m not a big romance fan, and I generally object to the time travel romance (been there, done that, got the torn bodice), and if I am going to pick up a romance novel I am not at all comfortable having the heavy–breathing parts read to me. And here … well, the cover art is embarrassing. I listened to the book at work, and every time someone came over to talk to me and I had to pause the Audible player, I sincerely hoped no one was paying much attention.

But the reason I generally object to the time travel romance is because so few of them are at all well done. From the sample, this seemed like it might be, and the narration sounded good, so I went for it. And I was very glad I did. It was fun.

The story: Isabelle Rochon, enthusiast of the Regency period, attends a reenactment ball and finds herself whisked back in time into the middle of an actual Regency ball in 1834. How and why, she has no idea, but it seems to have something to do with the antique card case she was handling when it apparently happened – which is promptly stolen from her on the street. She is fortunate enough to fall in with Ada Lovelace, who gives her shelter and a guide to this brave new world – and through whom Isabelle meets Lord Phineas Montagu, known as the Vicious Viscount, a man on a mission. 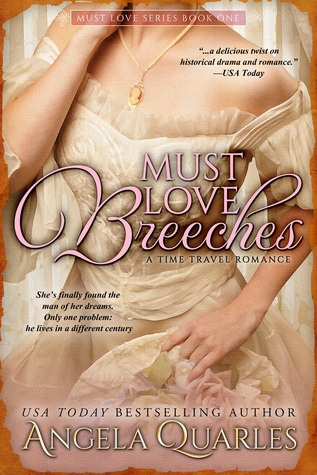 Some things could, perhaps, have been done better. For such a scholar and enthusiast of the period, Isabelle was alarmingly prone to lapsing into modern idiom and habits, and – to me – surprisingly slow to adapt all around. Naturally, I tend to think I’d do better – and of course I’m probably wrong. It just seems like it would be similar to an immersion course in French: much more quickly absorbed, as one has no choice.

“Running in a corset had been a mistake.” It always is. I know this from experience.

The writing on the whole is self-assured and sure-footed in the period, which I think is one reason that Isabelle’s anachronisms were so jarring to me. The Phineas point of view was lovely. I love the intoxication of the sight – and touch! – of an ungloved hand. And while sex-in-a-carriage is one of the squares on my Bad Historical Romance Bingo Card (patent pending), this version of sex–in–a–carriage is marvelous. And the twist in the tale, the little moment at the end which made me say “Wait, what?” and go back to hear it again? So good.

I love that I learned something new about Shakespeare in this. I had never heard of the Tate version of King Lear – and my hair either stood on end or went a bit grayer, reading that. Wow. Just wow.

I love Jane Wells’s male voices; her Lord Montagu (Phineas) is velvety and very nice. In British mode she reminds me of Juliet Stevenson, and of Heather Ordover in her American. I tend to be as wary of Brits’ American accents as they must be of Americans faking an English accent – have you heard some of the “Americans” they’ve used on things like the old Jeremy Brett Sherlock Holmes, or the Britcom of your choosing? But Ms. Wells’s American accent is not half bad – though occasionally there’s a little overlap. Overall really excellent.

This audiobook was provided by the author, narrator, or publisher at no cost in exchange for an unbiased review courtesy of AudiobookBoom dot com. Thank you!