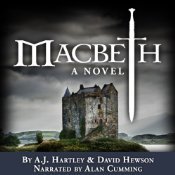 Audible had a sale a little while ago in which ten editors each chose ten books to sell for $4.95. I got the email saying “books from your wishlist are on sale!” but the link didn’t take me to any of them, so I ended up clicking through the ten pages to see what was out there. And when I landed on one page that featured Macbeth: A Novel and hailed it as “The Perfect Audiobook”, I closed the tab without looking further. If this person thinks that is the perfect audiobook, our tastes are clearly incompatible.

You may have heard the saying “If it ain’t broke, don’t fix it”? The Scottish play really was not broken. But, boy did A.J. Hartley and David Hewson feel they needed to “fix” it. By “fix”, meaning “reword the language that has endured and flourished for over four hundred years and add superfluous information”… There’s got to be a better way to morph a play into a novel.

They say little more than that, and then are gone, leaving upheaval as if they’d hurled a boulder into a still pond. There’s nothing more needed. Yet these authors felt the need to put more in. A bunch more. They broke up the rhythm of Shakespeare’s words, and padded the hell out of the scene, and … why? Don’t get me wrong – it’s a fine, fun idea, the novelization of Shakespeare; obviously, I was intrigued – I bought it. I listened to [part of] it. But it feels like all opportunities are completely missed. There’s nothing new here.

The same holds true of Duncan’s choice to declare an heir. Especially when the actor in the role fills the bill, the scene in the play is powerful. Throwing more and more words at it just dilutes it. The converse is also true – I realized that a couple of passages from the play actually use more words than these authors, and their editing resulted in a dumbing down.

Shakespeare used verse very specifically. To take a passage he related in verse and hammer it down into the prosiest of prose, without in any other way ramping up the drama of the moment, leaves it toothless.

I’ve read a handful of adaptations of Jane Austen, swiveled POV’s and whatnot, and the main problem most of these pose is that the new writer’s writing is placed in direct comparison to Jane’s, much to the present–day writer’s detriment. It takes a certain amount of skill to handle a retelling or expansion while avoiding the comparison. And if comparison to Jane is hazardous, how bad an idea is it to hold your writing up against … William Shakespeare’s? I mean … William bloody Shakespeare.

Example time:
THEIRS: “Sleep tight, Duncan,” he thought, “for this is a knell that summons you to heaven … or to hell.”

HIS: I go, and it is done; the bell invites me.
Hear it not, Duncan; for it is a knell
That summons thee to heaven or to hell.

THEIRS: “Tragic in the present yet glorious in the future…You shall beget kings, though never reign yourself”

HIS: First Witch: Lesser than Macbeth, and greater.
Second Witch: Not so happy, yet much happier.
Third Witch: Thou shalt get kings, though thou be none:
So all hail, Macbeth and Banquo!

THEIRS: “I could have done the deed. I will if need be.”
HIS: …Had he not resembled
My father as he slept, I had done’t.

Shakespeare did a damn fine job getting the points across: Macbeth adores his wife. These guys seem to think no reader will ever get that without being beaten about the head with it.

So that was the language as compared to the original. If you’re going to do a takeoff on Shakespeare, brace yourself for the fact that you will be compared (unfavorably) to Shakespeare. The writing in and of itself is not impressive, even without that contrast.

There’s a good and solid reason Shakespeare didn’t show Macbeth murdering Duncan. It’s not necessary. It has more impact offstage. The same goes for Lady M’s followup; the same goes for Malcolm and Donalbain realizing they’ve been set up; the same goes for … oh, just about every scene added. It’s padding. It all serves to emphasize how lean and pared down the play is. The shortest of Shakespeare’s plays, it says what it needs to and – no more.

As for the content … They placed a very large order with Captain Obvious, and another with Anachronisms R Us. There may have been four-poster beds in Scotland around the year 1000, but – put it this way: I don’t trust the authors, so I automatically doubt anything that seems even slightly off. They mention a “sideshow prop”; according to the etymology website I usually refer to, “sideshow” dates to 1855. Someone tells someone “Don’t look so glum”: from Middle English gloumen (v.) “become dark” (c.1300).

The authors also received a substantial delivery from the Cliché Closet – “The quiet before the storm” “snatching victory from the jaws of defeat” – and these are not, afaik, sayings Shakespeare came up with. (“Victory” seems to date from the 1800’s.) Macbeth: “A man of the people!”

This Duncan is a cross between Shakespeare’s vision (who was necessarily saintly, due to James VI) and the historical image – corrupt and selfish and swiving with a veneer of holiness. Oh, look, he just raped a 12-year-old girl. These authors didn’t seem to want anyone in the play to be worth the air they breathe. I’m not fond of the idea of not liking Banquo. And I don’t like this Banquo. Part of the power of the play is that Banquo, a good and honest man and a dear old friend of Macbeth’s, is a sacrifice to the situation. The clarity of it, the straightforwardness of it, is important. And Macduff’s wife is a shrew? Wonderful idea. Oh, AND Malcolm and Donalbain are “little liked”, and “vicious, striving younger versions of their father”. Malcolm is a sadist who tortured Cawdor. So… Maccers is the hero, eh?

The attack on the Vikings right at the beginning, killing them basically in their sleep, sets the stage for Duncan’s fate. What’s hilarious is that Macbeth is made to say, “I’ve never murdered a sleeping man before, let alone a king.”tugs on Maccers’s sleeve Uh, yer thaneship? Vikings? Belladonna? Hellloooo?

What is this with “picking apples straight off the tree”, as if it was something unusual and only found in exotic places? Apples grew in Scotland. And what is this with using the little boy Ewen to poison the guards?! That’s horrible. The kid is smart – you don’t think he’s going to put two and two together? “The child was not your fault” – uh, yeah he was. Entirely. “Hey, kid, see this wine? It’s the most awesomest wine there ever was! It’s wonderful! It’s liquid sunshine! It’s magical! You can’t have any!” Yeah, never saw that coming.

“It was the shriek of a woman, loud and anguished” – way to dilute the impact of the “cries of women” later. Woops, there goes Lady Macbeth, humming a little tune and scrubbing at her hands. Oh please.

Lady M is given a name. So, if Lady Maccers is Skena (“Skena Macbeth” just … no), what’s HIS name? Hm? His wife (even in bed) and his best friend, a friend since childhood, call him simply “Macbeth”. Hmph.

The girl has a tattoo of three salmon in woad on her front. She also has small, perfect, white teeth like a child’s. Know how I know this? I was told. Three times. In great, repetitive detail. From her POV, from Macbeth’s, and from Lady M’s. Three times in two and a half hours. Too much.

If it was just itself, it might be fine; it’s hard to tell. The writing isn’t dreadful, just … error–ridden. And so very not Shakespeare. Don’t get me wrong: I wouldn’t ever expect Shakespearian quality – just good. There is no added depth provided for any of the characters, no exploration of a setting only sketched in in the play, no new elements which aren’t ludicrous, and the writing is mediocre at best. Basically, there’s no reason for this book.