I mentioned in my review of another fantasy novel what a wild and ridiculous–sounding synopsis it had. (It really did.) So does The Tea Machine. Maybe moreso. Amazons and giant killer squid. Time travel and steampunk and a tea cult. 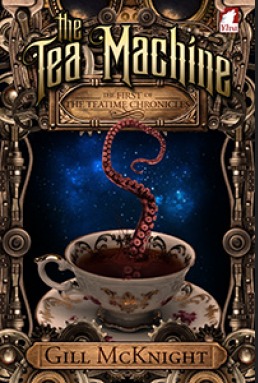 And it is a weird and kind of wild ride. Victorian spinster Millicent cossets her scientist brother, who has been working on a mysterious machine, which she accidentally activates and finds herself in … was it an alternate Victorian era in which the Roman Empire never fell, or was it a future in which the Roman Empire never fell? (Sorry – it’s been a minute since I read it.) And there follows a complex weave of storylines in which people end up in the wrong timelines, past and present and future, and that Still Roman timeline has to be fixed because it was the result of accidental tampering, and both Millicent and her brother find true love. Sort of.

I’ll be blunt: the writing was rather weak. I wish I could check a published edition to see if some of the errors (like apostrophe abuse, comma chaos, comma splices, and things like “prizing Sangfroid’s fingers” and “board shouldered” (that’s another one for the collection)) and “nevermind” and “she entered the empty dining room un–phased” and “populous” in place of “populace” and so very many more have been fixed. This was one of those ARCs that was a little hard to read simply because of my constant cringing at what I hope were typos.

There were also just so many things I questioned throughout. It’s something else I say often: if your writing wins me over, you can tell me just about anything and I will buy it. Tolkien mentions that the fireworks dragon passed like an express train, in a book whose setting is long, long before express trains were remotely possible? I have no problem with that. But if you don’t win me over, if you don’t capture me, I will absolutely question every single thing that catches my attention.

Like the fact that the futuristic woman soldier, Sangfroid, keeps complaining that Victorian people think she’s a man. “Well, you’re very tall. … And board shouldered. [sic; it also needs a hyphen] And your short hair doesn’t help.” And … she’s wearing trousers in a sea of gowned women. So … yeah.

I complained about Sangfroid knowing what Friday is. If Sangfroid is from a future in which Latin never became a dead language, then how is the fifth (or sixth, depending) day of the week named after Freya/Frigga?

And I really just wish that when it’s even remotely questionable writers would avoid using the word “okay”. Okay? Please?

It wasn’t all bad – I also saved at least one kind of fun thing (“…He was waving and smiling so as not to alarm us.” “Well, it didn’t work,” Gallo said. “I was very alarmed.”)

But for every thing I liked, there were a slew of things I didn’t. Like “There was a great steam slave uprising once, led by a semi–automate called Sparkitous.” That’s the sort of thing which makes me say blistering things under my breath. I was pretty generous, giving this three stars. I… think that was overly generous.

Like Loading...
This entry was posted in books, fantasy and tagged Gill McKnight, NetGalley, The Tea Machine, Time travel. Bookmark the permalink.