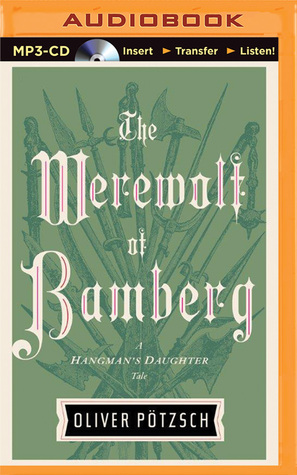 The good thing about listening to MP3 CD’s is that a nearly-600-page book fit on two discs, so I don’t have to worry about having to change discs mid-commute. (I’m not an idiot, so I’m not going to do it while in motion, and have you ever noticed that when you need a red light for something like this they all magically turn green? Next time you’re running late, drop something you kind of need out of reach, or smudge your glasses so that they need to be wiped. Voila: green lights through to your destination.)

The bad thing about listening to MP3 CD’s is that there is less sense of how far I’ve managed to progress in those 600 pages. And it felt like those two discs were in my car’s CD player for months. It actually was one month. It felt like the story could have been told much, much more economically.

I find it fascinating that author Oliver Pötzsch is “a descendant of one of Bavaria’s leading dynasties of executioners”. He has embraced that ancestry, and uses it as the backbone of this series about Jakob Kuisl, the hangman of Schongau, and his family. (I don’t think I realized this was the fifth book of the series when I found it on eBay.) Hangman – which means not only executioner but torturer. Thing is, he might have embraced it just a wee tad bit too closely, because that trade was rather lovingly explored in these almost-600 pages, to a degree that became kind of disturbing. No – not gonna lie: it’s gorge-risingly explicit at times. There were times I deeply regretted experiencing this as an audiobook, because on paper or Kindle I could have skimmed over the descriptions of torture. This way, with Grover Gardner enunciating every word, I couldn’t miss a thing, and there are things which have left marks. 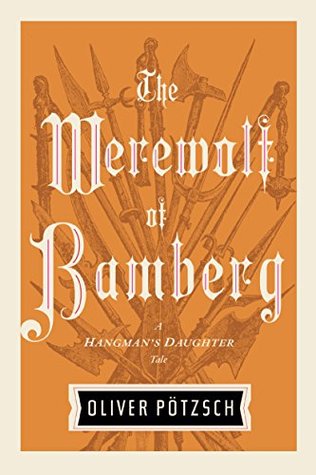 There is a lot going on in this book. Jakob and his family – his daughters Barbara and Magdalena, and Magdalena’s husband Simon and their two sons – make their way from Schongau to Bamberg to attend his long-estranged brother’s wedding, and en route the train they are traveling with is halted when a severed arm is discovered. It being 1668 in the dark woods of the Reich, superstitious fear ramps up almost immediately – and it’s a great beginning to a creepy tale of werewolves and serial killers, fog and abandoned houses, blood and death and scattered body parts and … theatre. Because just after the Kuisls arrive in Bamberg (and I think it’s fun that Simon is included in the Kuisl family rather than his own) there arrives a theatre troupe planning to spend the winter in the city performing German translations of Shakespeare and Marlowe and lots more (including Peter Squenz, a play featuring (originating?) the Rude Mechanicals from Midsummer).

The eeriness of the setting is well done. This is a city riddled with empty homes, places which – whether shabby or elegant, large or small – have never been taken over by the homeless or people trying to move up in the world. The story behind that is horrifying, and while I’m not entirely sure everyone in the city, including the homeless, would allow fear of hauntings keep them from appropriating some very nice abandoned houses, I’ll let that pass. The 17th century is brought to life in all its mud and filth and rawness. The narrative can become a bit drawn-out, a bit repetitive (oh goody, the elderly (for their time) brothers are brawling again), and there is a certain amount of recapping in which one character will fill in someone who missed something, which is always annoying (yes I know I was there), but suspenseful scenes are very suspenseful, and while I half-guessed the solution of the mystery I didn’t come anywhere near the actual full explanation. And many of the drawbacks of the book are to an extent saved by the characters. I like these people. Well, not really our two irascible hangmen, Jakob Kuisl and his brother Bartholomaus, the hangman of Bamberg (Bartl); their characters were not built to be liked – but his daughters, Magdalena’s husband Simon, Simon’s friend Samuel, Bartl’s fiancée, the actors, the old lye-scarred caretaker. Each has a beautifully well-rounded personality, each is immediately identifiable by his or her speech or actions (Magdalena would have behaved very differently from Barbara in the same situations, and vice versa). I thought Simon was terrific – very intelligent, a little milquetoast, completely deferential to his wife, and completely comfortable with that. I loved the relationship between him and his father-in-law. I’m not compelled to go collect the rest of the series, except that I would be happy to get more of Simon’s story. 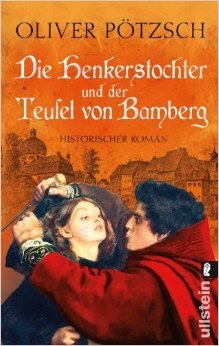 And, of course, Grover Gardner’s narration was excellent. Character voices, non-English pronunciations, and gallons of blood all are child’s play to this man and his marvelous voice.

My primary problem with the book, and this is perhaps a little spoiler-y so skip this last paragraph if you’re wary, is that here you have Simon, who was about to become a doctor when that choice was taken away from him, and his friend Samuel who is a physician. And there you have … oh, dear, I’ve forgotten: was it one of the bishops? (Here’s one of the problems with audiobooks: I can’t remember, and I can’t check.) Anyway. There you have this gentleman with an apparent bite wound and some escalating symptoms. About five minutes after he first started explaining what he was going through, I made a diagnosis. Then things move along, and with every virtual page I was more and more certain: it was rabies. And Simon and Samuel just kept puzzling over what it could be, and I began to want to yank them both out of the book and shake them – for pete’s sake, how many more clues do you need?? I began to doubt my assumptions that rabies has been around forever and that well-educated physicians ought to know what it was … and then one or the other of the two physicians actually uses the word “rabid”. Meaning “obsessive” or “fervent”, not “hydrophobic”. I wish I knew if that was a translation choice or Pötzsch’s, because honestly that just made me a little rabid. Even when the bishop (?) started becoming averse to liquids, they didn’t get it. No light bulb. No “aha”. It was a little ridiculous.

Like Loading...
This entry was posted in books, historical fiction and tagged audio, CD, Grover Gardner, histfic, Oliver Pötzsch, The Hangman's Daughter, The Werewolf of Bamberg. Bookmark the permalink.