I love it when a team comes together. I’ve been very much a fan of Diana Gabaldon for some time, and I like Lord John Grey very much. And as it turns out I utterly love Jeff Woodman’s narration. He’s wonderful. He has excellent timing, a marvelous gift for character, and, clearly, a sense of humor that suits Grey down to the ground. He reminds me a great deal of Simon Vance, actually, to the point that I double checked to make sure it wasn’t he under a pseudonym. It wasn’t. The only issue I have with the narration is a handful of repeated lines, where apparently an editor failed to delete out–takes. Odd.

I have to say, it had been a while since I met up with Lord John, and I had forgotten much of it. Honestly, it is a bit thick that bloody well everyone falls in love with Jamie Fraser.

Then again, he is Jamie Fraser, so…

I plan on using the word “absquatulating” as soon as conveniently possible. Possibly in conversation. Why have a reputation for weird without capitalizing on it? 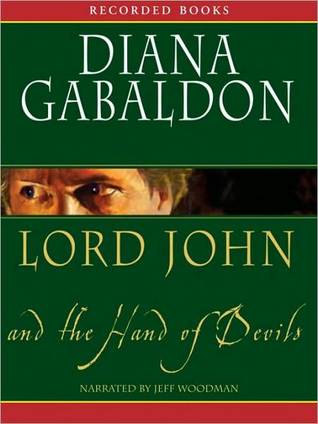 – “Lord John and the Hellfire Club” felt familiar – oh, that’s why. It’s not a spectacular story – though part of that might have been me thinking “isn’t this an awful lot like that other story, and what is going to happen to make this different?” When in fact (perils of the audiobook) it was the story I was thinking of, which I did not realize for some reason was part of this collection, and so of course nothing happened to make it different from, er, itself. I’m not even going to try to unravel that sentence.
– “Lord John and the Succubus” – That was different. Lord John was not in what I’ve felt to be his natural element here. The setting and the path of the story are unlike the other stories, but it’s fun, and unpredictable.
– “Lord John and the Haunted Soldier” – Such beautiful story–telling. It was entirely natural, no chunks of information floating by, tension maintained throughout. Eerie, with the underlying certainty that there had to be some rational explanation … unless there wasn’t… The emotions are honest, and the story leaves a mark. Excellent.

This right here is one of the hazards of becoming addicted to audiobooks. I think I could get the books and stories cheaper in ebook form, or even by trolling used bookstores or what–have–you. And I’m all about the cheaper. (I have no money.) But Audible offered this collection (in a sale), and I knew that Jeff Woodman was going to be one of those narrators in regards to whom money is (almost) no object. I want everything he’s ever read. Oh dear.

Like Loading...
This entry was posted in books, historical fiction and tagged Diana Gabaldon, Jeff Woodman, Lord John, Lord John and the Hand of Devils, Outlander. Bookmark the permalink.