A Place Outside The Wild – Daniel Humphreys 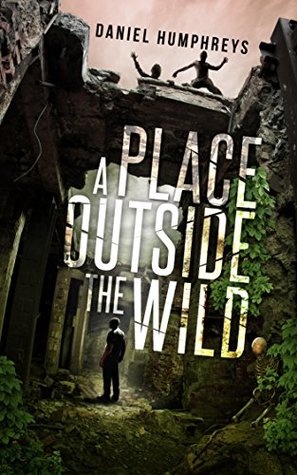 The author of this book came into one of my Goodreads groups to promote it, and – happily – I asked for a copy. I liked the idea of a culture aware of zombies having been caught up in a zombie apocalypse; the book takes place eight years after the z-poc, in a community of survivors who have rebuilt something that has begun to resemble civilization.

It never really bothered me that characters in, say, The Walking Dead had never heard of the walking dead before things fell apart, never saw a Caesar Romero movie or Pride and Prejudice and Zombies – hey, if I can suspend disbelief enough to the dead I can stretch it that much further. So I was surprised at how pleasant it was that these people used the “Z” word and knew pretty much right away that only a head shot would end them. And while I enjoy the beginning of the story as much as the next z-poc fan, I have always been fascinated by attempts at recovery, as pre-apocalypse supplies grow scarce. I may be one of the only people on earth who was interested in what’s commonly called The Walking Dead’s “Farmer Rick” phase at the jail, as crops were planted and pigs penned (poor pigs) and routines began to develop.

This book makes me wonder why more people don’t take advantage of something like what AMC calls the most popular show on TV, and build on it. All the areas in which the show is lacking are addressed in the book. People remember the past, and struggle with addictions; people work together and slack off; most importantly for this story’s realism in my eyes, the military actually lasts longer than a snowball in hell and winds up playing an important role in recovery efforts, rather than curling up and dying and/or doing as much damage as the zombies.

What is wonderful about the setting of this book is the acknowledgement that these people have gone through hell, hell is still just outside their walls, and while they’re starting to try to rebuild it’s still always with them. “Streams of normalcy interrupted by memories of loss.” When a handful of the 198 survivors decide to seek oblivion rather than continue to live with all the varieties of hell that make up the new world, it makes sense – as well as those survivors who turn out to be scumbags eager to profit by others’ desire for oblivion.

I’m not sure about the plausibility of “Two hundred thousand square feet” of drug store supplies still sitting untouched in its warehouse after eight years – but I think the point is that the speed of the events of the Apocalypse was such that no one ever got to it. I wish that had been made more evident.

The writing was absolutely enjoyable. Writing is more than putting a noun and a verb and whatever other parts of speech together in a sentence that makes sense; that’s important, lord knows, but more vital to a story for it to be really enjoyable is the story-telling. Anyone can tell a story – but for it to be a story that anyone else wants to read there has to be an ability to present characters who are believable and (hopefully) likeable (or at least people a reader is willing to spend a few hours with), moving through a believable setting, with a past and a present and a future.

“… Weighed more than the two of them combined. Not much of it was fat — his build was more wall than pear.”

And it’s terrific that not only the author but the characters know their zombie lore (one of my very favorite lines: “If you guys named it Woodbury, I’m leaving.”).

I loved the character building throughout. From the IT tech introduced at the beginning of the book, whose POV we see through for most of it, to the kids who remember the pre-apocalyptic world dimly if at all, they feel real. Setting was well done – I believed in the compound these survivors have fortified and made liveable over the past few years, and all the details of its security. If the world actually does go pear-shaped, one could do worse than to use this book as inspiration.

And to repeat what I said in my message to the author, the zombies in A Place Outside The Wild make the ones in The Walking Dead look like fuzzy little puppies. They were genuinely frightening.

Like Loading...
This entry was posted in books, fantasy and tagged A Place Outside The Wild, Daniel Humphreys, post-apocalyptic, zombies. Bookmark the permalink.