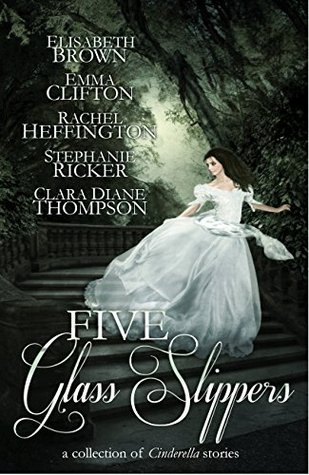 This is a collection of – in case it’s not obvious – five stories inspired by or riffing on Cinderella. Usually a collection of stories, whether by one author or several, is hit or miss… unfortunately, this one is pretty much “miss”. Well, no – four-fifths miss. I did really enjoy #4.

What Eyes Can See – Elisabeth Brown – “the romance of this collection”. “delicate writing style”. “She writes characters you cannot help but like…” – A painfully shy Cinderella, with absolutely lovely stepsisters and stepmother… Or is she painfully shy? The story’s ending casts some doubt on that, for me. I’ve been painfully shy all my life, and I wanted to shake Arella. All the elements of the fairy tale were referenced, kind of, but … far from having to go to great efforts to get to the ball, this Cinderella has to practically be dragged, and once there has to practically be nailed to the ballroom floor. It wasn’t awful. I just didn’t like it. Two stars.

Broken Glass – Emma Clifton – “a side–splitting comedy” – I guess I don’t have the genes for most fiction which is intended to be funny. Because if this was a side–splitting comedy, I … this was a side–splitting comedy? Someone borrowed Rosalind’s glass slippers and lost one at the ball, and now because of that she is apparently being forced to marry the heir apparent – although she is actually being courted by his younger brother. She is strident and obnoxious; younger prince Henry is a milquetoast (to the extent that I don’t understand why they even tolerate each other, much less want to marry; I give it three months), and I hated it so much I couldn’t finish. And for some reason it’s steampunk. Sort of. I’m not sure what that was all about. I did skip to the end and read the epilogue, and approved, but – too late. One star, DNF.

The Windy Side of Care – Rachel Heffington – What is it that makes people think “strident” is funny? Cinderella is a litigious serving maid trying to prove she’s a noble. The writing was rather worse than that of the other two, and I hated everyone in the story, and again refused to finish. One star, DNF

A Cinder’s Tale – Stephanie Ricker – Here, now. This is something else. This is a scifi retelling, in which our heroine is Elsa, a “cinder” – miner of cendrillon on a planet of boiling lava, an occupation which tends to leave its workers smudged with soot. Score. “Pumpkin patches, so named because the superheated lava puffed out in large bubbles” – score. Fairy, or fay, godmother – score. Wicked stepmother, or supervisor – score. It didn’t take long to realize this was something else entirely.

The way that everything in the fairy tale – from pumpkin patches to Jaq and Gus to Perrault himself to the need to fit an article of clothing to the corresponding body part to identify the girl – was lovely. I’m glad I started this review while I was reading the book (although I then promptly forgot about it); I am glad to be reminded of this author. I’d like more from her. Five stars.

She gave him a shy smile. “I suppose I must seem like an odd bird out of air.”
Jaq attempted to translate the mashed idioms. “Er, a fish out of water.”
She cocked her head at him. “I don’t think that’s an accurate metaphor. A fish out of water would be dead.”

We should be celebrating, not sitting around looking like someone kicked our frog.”
“Dog,” Jaq said absently.
“Close enough,” Marraine said dismissively.

The Moon Master’s Ball – Clara Diane Thompson – And then back to the not-so-great. It was confused, and confusing, and once again filled with unlikeable characters and muddled writing. By this point I think I can just say that all the positivity in my rating goes to “A Cinder’s Tale”, and leave it at that.