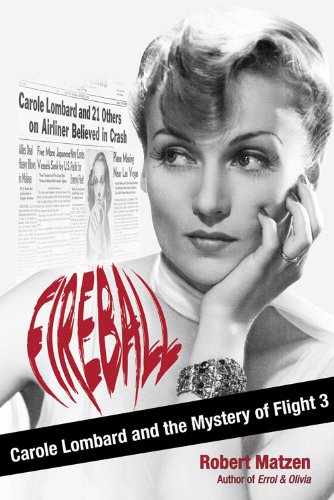 I began to read this with some trepidation… I didn’t want these two to lose their luster. I also didn’t want to cry over them, but I was resigned to that – when one of a loving couple is going to crash into a mountain in the course of a book, tears are going to happen.

In the end, was the Great Love Affair between Gable and Lombard everything fond fans say it was? I don’t know. Probably not. (Two words: Lana Turner.) Would they have been divorced in a few years? Maybe. But it doesn’t really matter. It’s sort of like JFK’s presidency – cut untimely short, there’s so much room left for fantasy and imagining.

And, also like JFK’s presidency, press coverage resulted in a public perception of the situation which didn’t bear much resemblance to reality. Which goes back to the beginning of this review. I kind of like the fantasy, the he-for-her-only-and-she-for-him illusion. It’s not any fun to become resigned to the fact that Gable was a dog, and Lombard was no saint herself. But … well, the couple in this book are human beings, not Movie Stars. There’s the difference.

This is the story of a woman described as the kind of friend everyone longs for, energetic and loyal and fierce – a fireball – and the fireball that ended her. I knew little enough about her, except for her earlier marriage to William Powell, her love of animals, and the romance with Gable; I had no idea about the other accident that changed the course of Carole Lombard’s life. Shocked, I felt stunningly unobservant never to have noticed the scars … until I went looking for them. They’re most definitely there in some pictures – I can’t say I’m not unobservant – but in my defense, makeup and lighting were used skillfully to hide or at least minimize them. Her tremendous heart, her “salty” language – and the reason for the language; her “Causes” which ranged from parrots to people and everywhere in between… No, this exploration of her life and death did not dim Carole Lombard in my eyes.
Supplemental to the tale of Gable and Lombard and that damned mountain, this was a look inside Hollywood of the 20’s and 30’s, and how Gable hated playing Rhett Butler but Lombard longed to play Scarlett, and the often vicious process of casting and celebrity. “The result is equal parts biography, rescue effort, and mystery; it’s also a love story and an unimaginable tragedy that continues to haunt me, as it may haunt you.” And it’s about early air travel, the uncertain first steps of the country into war, about the other people who were on that damned plane and the people they left behind. It could have been a scattered mess – but it’s not. The method in which Matzen tells the history, in which the timeline is cut in half and braided until about the 60% point where they catch up to each other, and the story of Gable and Lombard is woven together with that of all the other people involved in the fireball, works to deepen the story. I don’t think it’s easy to tell a story with a foregone conclusion; reading another biography of a beloved celebrity, I thought about how I would probably get his death out of the way early and soften the blow a bit. I mean, as with this book, I went into it knowing full well that he died some years ago, but the exploration of the long illness that killed him, culminating in his death and funeral and a brief aftermath, left me a bit wrecked at the end – testament more to how I felt about the actor than to the book. So I liked the fact that there is no coyness or artificial buildup to the very definitely foregone conclusion in Fireball. The emotional impact is still powerful, the description of the crash is horrific in its detail, but it’s not what the reader closes the book with for the last time.

The cause, or rather possible cause of the crash is explored, and no real answer attained. I found it remarkable that even in this story there are conspiracy theories.

Yeah, I cried. “If I can do it, so can you.” I learned a bit more about the Golden Age Hollywood stars I love so much – Spencer Tracy, and Lucille Ball, and William Powell. Gable and Lombard. And it didn’t hurt my affection for them – on the contrary. They are more fully formed in my mind’s eye, and knowing that I like them as human beings will enhance my enjoyment of their performances.

We’re not really supposed to quote from advance copies of books, but … well, that never really stopped me before, and I want to make note of: “…Stand your ground, and make it look like you were planting flowers on that ground all the while.” I’d like that cross-stitched and framed.

And I want to close with another quote, the author’s summation of why I wish I’d known the woman born as Jane Alice Peters: “the soft-hearted, hard-charging, caffeine-fueled, self-promoting, profanity-laced, nicotine-addicted, business-oriented, and usually optimistic sexpot and perpetual motion machine known to the world as Carole Lombard”. God bless – and angels keep.