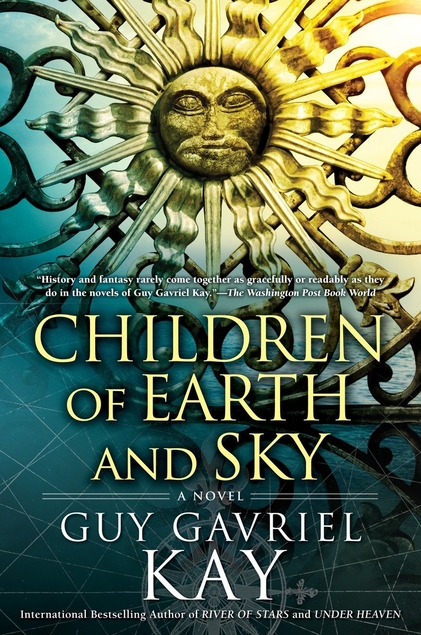 Life turns on a dime, shatters in an instant. A word spoken, or not spoken; a decision made or deferred. A decision made by someone else, someone in power, in another part of the city or in a city in another country. Rain or sunlight on a given day. Everything is precarious … but joy can still be found …

There is an immediacy to Kay’s writing I haven’t encountered … anywhere. There’s no other author who can make my stomach knot up at a word, or an isolated sentence. An inopportune word, or a word forgotten. A character’s decision to take this turn instead of that. A moment’s inattention. If a stair creaks in one chapter, it will be important before long. And then he says something like “Then the big, red-bearded one said, changing her life, changing many lives …” and something’s about to hit a really big fan. Foreshadowing in Kay’s world is a heart-sinking thing, leaving me on edge with a knot in my stomach, because it’s not going to be pretty when it comes to pass. Not. At all.

And the humor in the writing – so much of it, so unexpected still, wry and dry and bawdy and crude. It would be so predictable for a book featuring such drama to be weighty, but GGK makes me laugh as ofen as he makes me anxious. He’s one of the best.

Children of Earth and Sky</> features, like Tigana, another brother and sister, long separated. There are in fact echoes of several of Kay’s other books, and oblique references – showing that his work all inhabits the same universe.
…
Words of wisdom from GGK:
Doing the right thing doesn’t always save you.
and
Legends, if you crossed their path, could get you killed.

Like Loading...
This entry was posted in books and tagged Children of Earth and Sky, Guy Gavriel Kay, Guy Kay, Simon Vance. Bookmark the permalink.