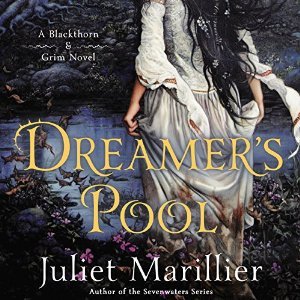 I wonder if I would have liked Dreamer’s Pool better in print. I listened to the Audible edition, which features four narrators each presenting a different character’s point of view. Nick Sullivan narrates the baritone Grim POV, generally more refined than I think Grim ought to be (although I’m not fond of his voice reminds me of Howard Keel, though having looked Keel up that’s a little ironic). (Actually, Nick Sullivan’s narration was a small part of why I returned a different book (The Bughouse Affair, though that had a lot more problems than just one narration). Scott Aiello voices the lighter-toned Oran – with some irritating flat secondary character voices (Donagan et al). I didn’t mind the two female voices as much, but I wondered a little why Flidais didn’t get a narrator/POV (until the reason became clear); that question is actually something of a detraction from the book, because all things being equal she ought to have her own point of view and narrator. The narrators’ Pronunciations were too-often just plain wrong, with repeated errors like Aiello’s of “Daeman” as “Demon”, Gold’s of “geis” as … “gas”, and homonym mistakes like “a scythe wound to the leg” coming out “wound” as in watch, not bleeding.

The first point of view section, that of she who was about to become Blackthorn, felt familiar – a prison cell, a woman unfairly imprisoned and constantly brutalized, a male confidant nearby, viciously cruel guards, counting the days with hash marks on the wall, escape. It took a minute to remember [book:All Our Yesterdays], by Cristin Terrill, which started out much the same (though not in a medieval/fantasy setting). Blackthorn, in dire need of anger management and PTSD therapy, fights her way out of the prison, and – barely- tolerated the devoted Grim following in her wake. It’s hard to listen to Blackthorn’s antipathy to Grim. In a way it’s a plus for the book – it’s not a matter of insta-love between two prisoners, or anything so … expected. But it also doesn’t entirely make sense. Yes, Blackthorn is deeply scarred, still mourning her lost family, but it’s a case of the abused becoming an abuser herself – she is terribly cruel to him.

Grim himself is an enigma. What does he want? Is there more to his motives than seems obvious? What has he been through beyond the horrors of that prison? He’s a very interesting character – but ill-served; a physical description doesn’t come until about three and a half hours into the audiobook. There could well be logical reasons for that, but even if Blackthorn isn’t exactly in any temperament to go about remarking on other people’s hair and eye color, there had to be some way to slip in a tidbit here and there. And, again, the narration of his point of view did not fit him.

The name Flidais kept throwing me off, since I remembered it from Guy Kay’s Fionavar Tapestry, and that Flidais was male. (I wonder why, since a search indicates that Flidais was a sort of Celtic Artemis. Hm.) I’ll come back to the change in her personality in a bit, but for this paragraph I’ll just say that it was too extreme. In the letters she exchanges with her prince betrothed, Oran, she is sweetness and light personified, smart and inquiring; then she arrives for her wedding with him, and her personality has undergone a massive change. She was suddenly a diametric opposite to the girl in her letters

Oran’s a bit annoying and slightly pathetic, suffering in utmost sappiness from love at first letter. They keep referring to him as The Unconventional Prince, and it’s as though he flits through his days trying to deserve that badge. He reminds me a little of Marianne in Sense and Sensibility – consciously and conscientiously Romantic, with a capital R. This is a man who, if spurned, would refuse to eat, would make sure he did not sleep, would become pale and haggard and suffering, and relish every second of it. And I became very, very tired of hearing about his … stirrings. And certainly about his raging desire. Much less his manly parts. The main reason his sections kept my attention was a spoiler I saw somewhere early on, mentioning Flidais’s cruelty, which was unexpected. Until it wasn’t. 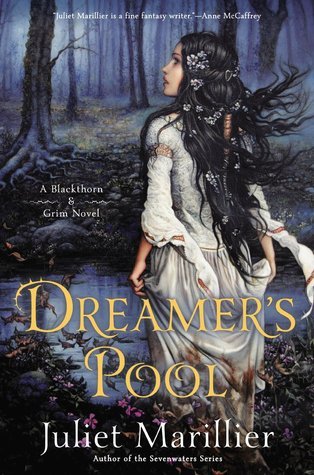 Juliet Marillier is a tremendously respectedwriter, but somehow I’ve never clicked with her, and this book, this duology, is everything why. First, I had … qualms about the plot. On the surface it was an interesting idea, but in spots it doesn’t stand up too well to much scrutiny. A girl disappears without a word – which is a divergence from her usual behavior – on the same day her father dies in an extraordinary accident … and no one thinks twice about it? A woman drowns; “Perhaps she could not swim”, someone refelects … Then why did she go swimming in the first place? That there is something up with Flidais is telegraphed strongly – “Until the day of the drowning, Lady Flidais was devoted to Bramble, and Bramble to her.” Ruh roh, I said at the time, because it was thoroughly blatant. The sweet, eager, earnest girl in the letters vanishes entirely (entirely coincidental to that drowing episode), and the creature that shows up in person is horrendous. She basically rapes her ardent, innocent young lover in a stable; it was nice to see Oran show some spine in that situation, but good Lord. And those convenient headaches of hers … once he started to suspect something was up, why didn’t he directly question her in the course of a conversation about something they talked about in the letters – or ask her about something he never wrote about, and see how she responded? These are the same questions I always ask in any possible mistaken identity or substitution case. There is always going to be something no one else could possibly know; there is always going to be some question certain to put paid to any question of identity. “Flidais, do you remember what I told you in that specific letter that time? No, don’t try to scamper away with a fake headache…”

And while sentences are well crafted and the language is occasionally rather beautiful, the story-telling grated at times. I already griped about the use of euphemism, particularly relating to Oran and sex. But, worse: “And yesterday, the two of them had gone up to the baker’s”… Yes. I remember. Because it wasn’t yesterday for me – it was six minutes ago audiobook time. Why are you telling me again? And yet Marillier does this, over and over. And over. She either has some need to inflate her word count or has no faith at all in her readers’ retention – or perhaps it’s a lack of faith in her own ability to get her points across? Whatever it is, she needs to get over it, because it’s one of the most irritating habits in writing. “Tell us what happened that day at Branoc’s barn.” Oh, no, not again, I’m begging you, please don’t… “And there was a book…” I KNOW. In one particularly bad example, an event plays out in “real time”, and then, instead of a sentence like “and then they told him what had happened”, Grim tells the story to someone who wasn’t there … and then a short time later Blackthorn hits the highlights for someone else. No new information, nothing that wasn’t already covered – twice. By the second iteration I’m usually sighing and rolling my eyes and making the “yes, got it, get on with it” gesture. If there’s a third repeat I’m usually ready to scream.

Still, the characters were strong, if not always likeable. Lady Sochla was pretty cool. I empathized with Blackthorn:

“That didn’t stop me wishing for the life of a hermit. … I wouldn’t be lonely. There were the memories, mostly memories I didn’t want, but a scattering of good ones too. And I could always get a dog. No a silly little lap dog like Lady Flidais’s creature. I’d have a big ugly hound that kept folk away from my door. Nice dream. Pity that was all it was.”

The mystery of both Blackthorn’s and Grim’s backgrounds is kept hidden from the reader, and doled out only in hints and vaguenesses, and that’s wonderful. As much as the writing in general aggravated me, I still bought and listened to the second book. I’m just not sure I’ll read much more Marillier.