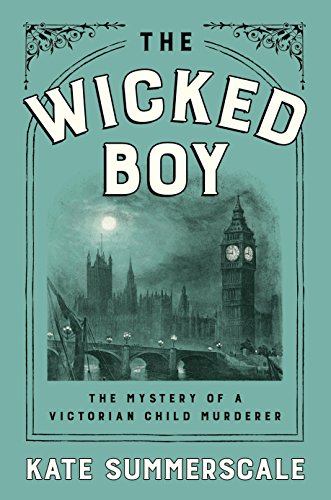 This book, this case of a boy killing his mother (or boys), is more proof that playing violent video games shapes young minds in ways that lead to violen – Sorry? Oh, it’s not 1995, but 1895? Oh. Right.

This book, this case of a boy killing his mother, is more proof that reading sensational literature shapes young minds in ways that lead to violence and depravity. As Louisa May Alcott said, “‘She is too fond of books, and it has turned her brain.”

The killing at the center of this book is extremely disturbing. The older of the brothers is even moreso. Don’t get me wrong, the younger brother is creepy – but the older one … “Robert was taken back to Holloway gaol. He was laughing as he got into the cab.” It’s the sort of thing that’s always pointed out with salacious horror in coverage of trials – the defendant and his lawyer were seen laughing during a break in the harrowing testimony, that sort of thing. It’s not how a kid should … be.

“Be as careful of the books you read, as of the company you keep; for your habits and character will be as much influenced by the former as the latter.”
– Paxton Hood

I’ve often heard of Broadmoor prison; in fact, there is an apartment complex around the corner from me which I thought about, but honestly couldn’t seriously consider because of the name. Come to find out, the place that has lived in my mind as a rather horrific insane asylum (“‘Broadmoor!’ as R. J. Tucknor wrote in a short story for Reynolds Newspaper: ‘What visions of horror, ruined lives, and blasted aspirations, of madness and despair, does that single word conjure up!'”) was … kind of a nice place to live. I won’t spoil it, but it basically amounted to a place where one didn’t have to worry about keeping a roof over one’s head or feeding oneself, with no mundane worries or responsibilities, where one was surrounded by wholesome recreation opportunities and could even find oneself contributing to dictionary creation. If you were a man you even got an ounce of tobacco each week. There are days (and not a few of them) when I’d love to be an inmate at Broadmoor. (The good part. There was a bad part.) Oh, and there were interesting neighbors: “One elderly inmate, said to have killed his mother in 1849, would inform passersby that he had great mysteries, comets, suns and fires fastened to his shoulders.”

“In every other age and class man is held responsible for his reading, and not reading responsible for man. The books a man or woman reads are less the making of character than the expression of it.”
– The Pall Mall Gazette

I was entertained to read about “the sour, urinous scent of the Bryant & May match works”… That’s much the way I now feel about the Bryand and May mystery series after its author’s recent remarks.

It was a fascinating examination of the specific case and its setting – and its aftermath. Well-researched, well-written – and well recommended.