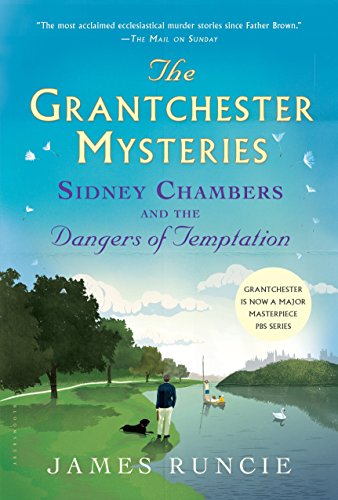 How strange. I’ve fallen for Grantchester on PBS, so when I realized this was that I pounced on it on Netgalley. But this actually wasn’t that… it’s that plus a couple of decades. Sidney’s relationship woes on the show have settled, and so has he.

And that’s kind of a shame. The heart of the series is basically Sidney’s angst, the post-traumatic stress from the War, and his difficult, ambiguous relationship with Amanda (well, no, his feelings for her are not difficult or ambiguous; she is difficult and ambiguous. And kind of awful. Poor Sidney), and his relationship with Geordie. And in this collection none of that is in evidence. Young and troubled Sidney is engaging. Middle-aged and settled Sidney is kind of smug and annoying.

I thought it was a little hilarious when someone (sorry – didn’t note who) remarks “I hate it when vicars get the guitars out.” I felt much the same way about what they called “folk masses” in my childhood church…

Great line: “You must never leave me to wait on my own in public again. I haven’t got the cheekbones for it.”

I’m not sure how entertaining the name-dropping was – like “an up–and-coming actor called Ian McKellen”, for example. There was more. I sometimes enjoy glimpses like that, but here it mostly caused eye-rolling.

I plan to at least try one of the novels, to see if the charm of the series is based in charming writing or if it’s something endemic to the actors and television writers, but these stories? Meh.