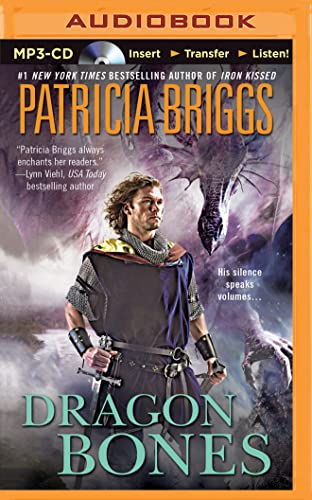 Patricia Briggs is an old favorite of mine – I’ve loved her from page one of the first book I ever read by her. Which might well have been this one – not my favorites among her work, the Hurog Duology, but (as I always say) that’s like saying “not my favorite chocolate”. In hunting out books on CD to listen to in the car, I came across Dragon Bones on MP3 CD for a surprisingly low price ($5! I think it was on sale), and while I didn’t love the sample I went with it.

Note to self: don’t do that. It’s not worth it. It doesn’t really matter how cheap something is if you’re going to spend several commutes sighing over it (in a not-good way) – or yelling at it.

The book is excellent. I remember the last time I re-read it, a couple or three years ago, and I remember finishing it with happy sighs. I love the characters, and I love the setting and worldbuilding, I love Patricia Briggs’s style, I love this book.

The narrator is an actor. His voice wasn’t too familiar, so I did the Google Image thing, and went “oh, right”, and then shuddered over that picture of him with the cornrows. (Damn, I used up my brain bleach after my coworker got back from a weekend with her ex.) And for parts of the book he’s just fine. He is not, in the main, unpleasant to listen to. I found it a little annoying that the voice of the main character, Wardwick, is deeper than the first person narration, but Ward spends most of his time trying to sound dumb, so it’s kind of an assumed voice. Fortunately for the sake of the audiobook Ward’s sister is mute, so I didn’t have to worry about how that characterization would come out.

One problem is that Mr. Manganiello has a bad case of Misplaced Emphasis Disorder. Stressing one word over another, obviously, indicates how the sentence should be interpreted by the listener. When the stress is on the obviously wrong word, it changes the meaning of the sentence and acts as a huge distraction from the story. “So he thought” is completely different from “‘So,’ he thought”, and they’re both completely different from “so he thought”. I would expect an experienced actor to have a better sense for that – or for there to be a director on hand somewhere saying “hold on, try that again”. And then there’s an irritating sharp “S” now and then. I’m just grateful I wasn’t listening to it with earphones.

I would also expect a sentence like “they’d improved a bed before the fireplace” to be fixed. How did no one catch that and get it fixed to “improvised”?

But in the end the book prevails over the reader. Ward is a wonderful, wonderful character, surrounded by wonderful characters. I always say about Barbara Hambly that you could take any secondary character, or even any background character, and there is enough to them that you (she) could turn around and write a book centered on that character. Patricia Briggs comes very close to that as well. Ward’s sister is terrific. His allies in the household are well-rounded – and are presented believably as people who have learned not to provoke their ruler, who have known Ward as damaged and slow for years and have to adjust to his real self. The evil – Ward’s father, the king, the one that betrays Ward – is a bit “evil-for-evil’s-sake”, but they’re frightening and effective. But Oreg is a rich character who could support any number of books on his own.

The setting is wonderfully realized, as well. And I enjoy the fact that Ward and his folk are the barbarians of their world; they aren’t necessarily expected to eat with utensils and speak in complete sentences. And I think it’s pretty marvelous that Ward takes advantage of that, and of his own appearance, to make his way in the world as needed. He’s … just a great character.

So, no, while this and its sequel aren’t my favorite books by Patricia Briggs, I love them.

The audiobooks? Not so much.