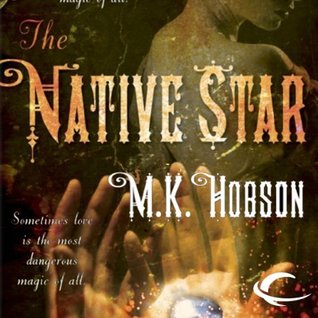 In a lot of cases, it’s incredibly helpful to be able to listen to a sample of a book on Audible before buying. It often makes all the difference in whether or not I’ll commit to a book. Unfortunately in this case the sample was completely misleading. It was terrific – it was creepy and fascinating, and brought in the Civil War and my goodness what are these terrible men up to? So I bought it, and, still looking for a good fantasy set in the period, listened to it. The problem was that the sample was part of a prologue; the book proper skipped from South Carolina to California, from the mysterious happenings in a haunted barn to an unpleasant young woman casting a love spell. And it is with this young woman, Emily Edwards, that the story stays until the epilogue.

She is not a likeable character. It is excused as extreme pragmatism, the tendency to set aside everything else in favor of what is necessary. For example, though she does not want to do it, and in fact dreads the consequences, she determines to place a love charm on a young man of decent fortune in order to keep herself and her adopted father from the depths of starvation they have recently endured. She’s snappish, stroppy, and closed-minded. She’s racist, too.

Harassing her and her Pap is Dreadnought Stanton, a wizard who keeps trying to instruct them in how things ought to be. Now, it’s a common enough trope that the hero and heroine bicker until they inevitably become lovers (and usually after). Sexual tension is shown through sparring, when an author can come up with no better way to do it. However, this guy is introduced so negatively, with so much apparent malice, that it’s very, very difficult to stomach it when these two do, inevitably, become a couple. And, of course, bad as he is, she’s even less pleasant. It’s not believable.

The onomatopoeia was excessive. Every action in the book makes a sound, and every sound is conveyed.

There were holes in the story that were immediately obvious. How does a hick farmer in the nineteenth century Midwest know that glucose is sugar? How is Miss Magic-Negator Emily supposed to ride in a magic-driven biomechanical device? And if it’s not magic-driven, what does keep it together? The bad guy – with an incredibly awful accent – gives Our Heroes something to drink before they realize who he is, and then he brags about how he slipped in a compulsion potion. Everyone ends up with at least a mouthful, and it has obvious and bad effects on Stanton – and it seems to take forever for anyone to worry about what that sip might have done to Emily.

Unfortunately, a weak narrator did not help a weak book. Pronunciations were all over the place, and drove me crazy – everything from mispronunciation of common enough words like “vestibule” and “impudence” to a mangling of “trompe l’oiel” that made me, a former art student who took an entire course painting one trompe, grit my teeth. “Black Maria” is pronounced as though it had something to do with Natalie Wood’s character in West Side Story. Some of the trouble is the usual misplacement of emphasis in sentences; it’s as though narrators can’t hear what they’re saying, and “narration” overrides natural speaking patterns. And what a shockingly bad Italian accent for “Grimaldi”. And an even worse Russian one.

One very brief bright moment in the narrative was a line which – unfortunately unintentionally – made me smile, because of its absurdity: “Get yer goldurn hands offa my cockatrice.” Second place in unintentionally hysterical lines goes to: “Miss Edwards – will you bring out the nut?”

But about three quarters in I swore that if I had had to hear “carissima mia” one more time I would scream. And very shortly after I made a note: