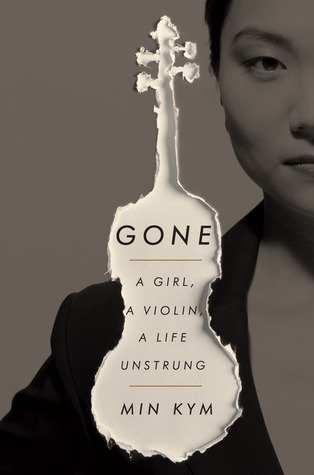 Gone is the story of a woman with a violin, who had begun as a child prodigy on the violin, who had found her equivalent to a soul mate in the perfect violin for her, and from whom this violin was stolen. It was a Stradivarius, and so worth a great deal of money – but, more importantly to her, it was the instrument from which she had brought music for ten years, which she had nurtured and which had nurtured her, which she had expected to die holding. Which in a moment of weakness, of illness and trust in the wrong person, vanished.

And let me tell you, that wrong person? I believe Min tried very hard to report at least somewhat objectively, and even so I wanted something dire to happen to him.

All the while I was reading this tale of her training and of the violin and of its loss and the violent effect that had on her, I was trying to think of something in my life that would hit me the same way. There are things I have lost that have hurt me – like the entire collection of my family’s Christmas decorations, gone, which still keeps me up at night from time to time – but this … I had planned to be a painter, and there is nothing I can think of, even to a sketchbook or a work in progress or finished work, which could be as tremendous a loss as a violinist’s violin.

And, while reading this, I spent a lot of time thinking about the nature of thieves. Do they realize what they’re doing when they’re doing it, the pain they’re inflicting, or does it simply not matter to them? I have a friend who came home one evening with her two young children to find their apartment stripped bare – people had come in and taken everything, from electronics and money to appliances to all of their clothing, to dish towel that had been hanging on the oven door handle. Did the pain and shock and horror they were leaving behind them in that empty apartment ever occur to the thieves, or was that part of the allure of the thing? Were they just looking to make as much money as possible out of the evening’s work, or were they purposely looking to make it hurt as much as possible? Given the sheer thoroughness of the job, I tend to think the latter. And what forms the kind of mindset that can do something like that – or something like stealing the means with which someone earns their living, the most important part of her life? Stealing for money I can understand, just about. Stealing from people who don’t have much, to injure – I begin to understand why sometimes the penalties for theft are greater than the penalties for murder. I doubt what I’ve just blathered on about is part of what goes into sentencing – I doubt prosecuting attorneys take a victim’s trauma much into account when looking to punish the person who stole from them – but I never took theft quite as seriously as I do right now.

In a way, my friend’s loss of just about everything she owned is as close an analogy as can be made to Min Kym’s loss of her Strad. I think I understand the importance of the violin as much as anyone can who doesn’t play. I meant to be a visual artist, and, again, there’s no equivalent in that world – steal my brushes, and it won’t be much more than an infuriating outlay of money to replace them. If nothing else, Min has done a service to musicians by laying her heart open in the pages of these books, and making it just a bit more comprehensible for those of us outside her world: to steal a musician’s instrument is to steal her life.

Someone had the stupid audacity to say to her at some point that well, she could and would get another violin. Having read this story of anguish and panic and despair at the loss of, basically, an appendage, I’m not much inclined to defend that person. The only defense that can be offered is ignorance.

My rating for this book doesn’t necessarily reflect its literary quality; it’s always hard to judge an advance copy  (I received this through LibraryThing’s Early Reviewers), because they always come with the warning that the text is not final, the promise that errors will be corrected in the final proof. So I’ll put faith in the promise and heed the warning, and hope that someone sees this book as someone once saw Min – a diamond to be polished.

Because it’s an amazing story, small and intimate and immediate but also very deep in scope and applicability. Her life as a prodigy is told quite matter-of-factly, without arrogance or even really pride, as though she had little to do with it. And that’s how it seems: a prodigious talent expressed itself through her, and she has merely done what was necessary to give it a good home, hone it and allow it to shape her. The instant recognition upon picking up her Strad is like something out of a romance novel – true love at first sight. And it led to what amounted to a real marriage – each partner working with the weaknesses of the other to create something wonderful.

Unfortunately, this story is real life and not a romance novel; the Happily Ever After lasted ten years, and then: separation. Fortunately, the loss of even a Strad can be survived in much the same way lost love is – after a lot of pain, self-doubt, second-guessing, what-ifs, bad decisions… and maybe a new love to, if not replace the old one, then fill in some of the space left empty, with a new shape. This book is the exploration of the pain, and of the healing, and an examination of who Min is, with and without a violin in her hands. For the honesty and passion of the story, I couldn’t quite bear to rate this book less than five stars. And I wish the author all the best.

Like Loading...
This entry was posted in books and tagged Gone, LTER, Min Kym, Stradivarius, violin. Bookmark the permalink.