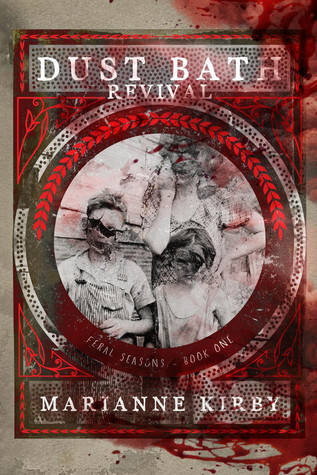 I’ve developed a prejudice against books with 16-year-old protagonists. There are almost as many book synopses that start with “16-year-old so and so…” as there are book titles along the lines of Somebody’s Daughter or Wife or Sister or whatever. I’ve begun to find those descriptions immediately off-putting.

Fortunately, I usually don’t read synopses before I start books these days, so Hank, 16-year-old protagonist of Dust Bath Revival, slipped by me. I’m glad. Because this is a stay-up-past-your-bedtime kind of book, a one-more-chapter no-I-can’t-stop-now sort of book, and Hank isn’t the typical 16-year-old all those books center on. When I say that throughout the early chapters of the book she and her big brother Ben continually reminded me of Scout and Jem Finch, Marianne Kirby needs to take it as one of the biggest compliments I can give.

What is it that’s in the dust, in the dusk, that kills chickens and terrifies people so? The first few chapters, with the edge of fear under ordinary interactions, the tattered red baseball cap, and the scattering of white feathers, did a remarkable, subtle job of making it very clear that I should be afraid, very afraid… even without knowing why.

Spielberg accidentally discovered that it’s a lot scarier when you don’t see the shark.

When the shark in this case, the Reborn, is revealed – and especially when the mechanics behind the shark are revealed… then, unfortunately, a lot of the subtle, a lot of the afraid, and a lot of my compliments dried up. From the moment that something, shall we unspoilerishly say, happens to Ben and Hank begins to fend for herself, I disagreed with the way things were going. I didn’t like it in terms of the story, it didn’t make sense to me in terms of storytelling, and where it was going was not the direction I was interested in. It was as if, being thirsty, I wanted to head toward a well, and the book had me by the hand dragging me away.

And if I didn’t like the first major turn in the story, I have to say I absolutely hated where it went from there. It was still compelling to read, but where in the beginning the compulsion was positive, by the end it was partly annoyance and partly being close enough to the end that I wanted to just push on and finish.

I am probably supposed to heap kudos on the author for having a young lesbian as a main character, and I will say that I congratulate her for presenting Hank and her budding sexuality as just what it is – not as an aberration, not as anything wrong or right or sinful or correct, just what is. My only objection to any of it was the simple fact that I’m just uninterested in a teenager fumbling his or her way through first love or lust, of whatever gender, which I guess is why I generally steer wide of young adult novels. (Did I know Dust Bath Revival was YA when I requested it? I seem to think not.)

I wish I could have read the book I thought it was going to be in the beginning.

But remember: Always carry a chicken when you cross a bridge.

The usual disclaimer: I received this book from the publisher for review.