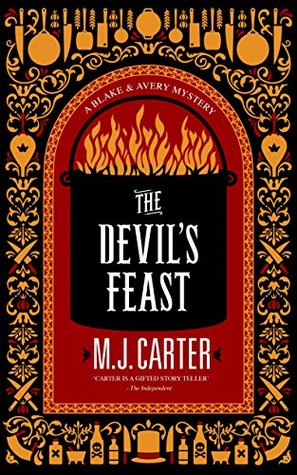 I wonder if I would have enjoyed this more if I’d read the previous book(s) that featured these characters. It wasn’t terrible, by any means; the immersion in a 19th century kitchen serving 300 or more was fascinating. The mysterious Blake was truculent and difficult. Avery, the first-person main character, was all right, if a bit dim at times. His dependence on Blake reminded me of a child separated for the first time from his mother, constantly seeking reassurance.

It was somewhat annoying to have Avery’s CV regurgitated as often as it was. Medals in Afghanistan, saved a maharajah, was with Mountstuart before he died, etc. – it seemed like every person meeting him for the first time got the rundown. At least the same wording wasn’t used each time.

I liked the fact that the economic situation of everyone is kept in mind. Within the confines of the club and its kitchen was a range of people, men and women and even a few children, ranging from the wealthiest men in England to people grateful for leftovers to bring home for hungry families, from men who would be financially damaged if the club were closed to people who would be destroyed if the club went down and their jobs with it.

I was left intrigued by Avery’s relationship with his wife. She’s back home; he guiltily prolongs his stay in London, guiltily puts off letting her know, and then upon seeing her again has absolutely no idea how to behave toward her. He still cares for her; he tries; but he has no clue why she reacts the way she does and is stymied because, not knowing what he’s done wrong, he doesn’t know how to fix it. Her obvious mental illness is well handled in the setting.

On the whole, though, it all felt like it took a bit too long, and Avery’s ineptitude and extreme insecurity were a bit tiresome. And Blake was a bit too mysterious, truculent, and difficult. It would be interesting to read an entry in the series where the two of them work together; I might look into that one of these days.

Like Loading...
This entry was posted in books, mystery and tagged M.J. Carter, mystery, The Devil's Feast. Bookmark the permalink.