I feel compelled to state up front that I bought this audiobook in 2013, before the celebrated musical was much more than a twinkle in Lin-Manuel Miranda’s eye. And actually I can honestly say the musical wasn’t even on my mind when I chose this to listen to. I have been seeing the internet blowing up about Hamilton for ages now, but for me rap=No, so I never explored it. Well, three or four chapters into the book I got curiouser and curiouser, so – having accidentally signed up for Amazon Prime, and recalling that the Broadway cast album was free for members – I paused the book and queued it up. Rap still=No, but … wow. I’m a convert. And it turns out that it was inspired by this book, and from what I can see is actually a remarkably faithful adaptation. Which is fantastic. (You know the whole “won’t throw away my shot” theme? That didn’t originate in a rap song.)

Having addressed the musical elephant in the room…

How has Alexander Hamilton gone so unnoticed, or at least under-noticed, for 250 years? His story is amazing. Seriously, wildly, fascinatingly amazing. Lin-Manuel Miranda, well done. Very well done. How did a bastard, orphan, son of a whore and a Scotsman, dropped in the middle of a forgotten Spot in the Caribbean by providence, impoverished, in squalor Grow up to be a hero and a scholar? With a tremendous amount of luck, ample wit and skill to take advantage of opportunities and make them when they didn’t come naturally, charm and determination and an utterly brilliant mind, is how. It’s a tremendous story. It’s one of the few good things that has come out of the past couple of years, and one of the only good things that happened to me in 2016. Oh, and Hamilton is referred to as a “raging Anglophile” – that will be my new subtitle. Except on April 16.

As the book wore on, I started to get the uncomfortable feeling that I’m a little like Hamilton. Not in a “what a brilliant person with incredible drive and will accomplish so much etc” sort of way … No. “He would be devoured by dislike of someone, brood about it, then yield to the catharsis of discharging his venom in print….’The frankness of his nature was such that he could not easily avoid the expression of his sentiments of public men and measures, and his extreme candor in such cases was sometimes productive of personal inconveniences,’ observed friend Nathaniel Pendleton. Also, he was “incapable of a wise silence”. Oh, how I empathize with this… “Hamilton now reverted to lifelong practice: he would drown his accusers with words”. Yeah. Sometimes that’s all you’ve got, isn’t it? All his friends and advisers warned him off responding to the pamphlet outlining his adultery and supposed fraud/embezzlement – and instead he went with his gut and wrote, and wrote, and wrote with “a vengeful glee”. Alexander Hamilton would have had a glorious time with the internet. He would not have been a “write the email, save it as a draft, then delete it when you cool off” kind of guy. He would have been a “typety typety typety typety SEND” kind of guy.

This might sound a bit weird, but I’ve been interested in Benedict Arnold for years. The thumbnail sketch of him that everyone knows (basically: Traitor) isn’t all there is; it was when I discovered that he – called by Chernow “that poor bastard Arnold” – was a weak man, played like a tambourine by his manipulative ambitious bitch of a wife (Peggy Shippen Arnold), that he was thwarted by everyone who wasn’t playing him, leaving him even more open to be played… and that he originally lived and worked in New Haven, CT, my own back yard … I still want to write a book on the man. The Arnolds are entirely tangential to Hamilton’s story, but the little bit of focus is fascinating.

Another sidelight, on Jefferson, is also eye-opening. From this angle, he was a sniping, petulant, cowardly (!) slave-holding hypocritical bitch. Oh, and as president he was … “frumpy”. I mean … It’s a little mind-blowing. 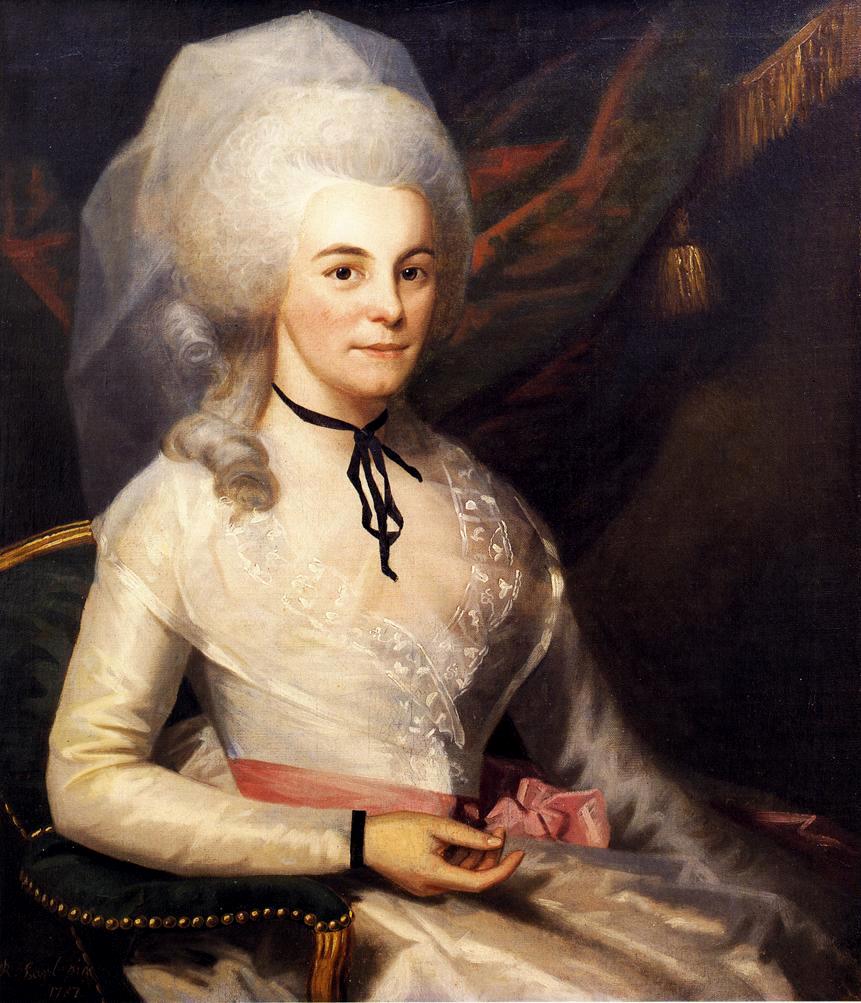 Perhaps my favorite thing about a truly wonderful book (and audiobook, and musical) is that Elizabeth Schuyler Hamilton is given a warm and loving spotlight. This woman … I am nearly as impressed by her as I am by her impressive husband. She was staunch. She was steadfast. She was strong. She must have felt that her world was ending when Hamilton was killed – but she prevailed. She kept going until 1854, fifty years after the duel, bearing a torch with her every single day to try to keep her impressive husband in people’s memories.

The book was a great experience in audio. To be honest, though Scott Brick is a celebrated audiobook narrator, he has never been a favorite of mine; I’m wondering if I’ve listened to samples of him reading fiction, though, because I very much enjoyed his reading of Alexander Hamilton.

“[This] bronze statue of Alexander Hamilton by James Earle Fraser was dedicated on May 17, 1923, and can be found on the south patio (Alexander Hamilton Place, NW) of the U.S. Treasury Building in Washington D.C.” — Wikipedia

There was one surprise favorite moment in the book. “Near his New York home, the walls of a building were defaced with the gigantic words, ‘Damn John Jay. Damn everyone that won’t damn John Jay. Damn everyone that won’t put up lights in the windows and sit up all night damning John Jay.'” Which rang so many bells. I knew I knew that from somewhere. And so I did – from the movie Lost in Austen: Bingley (to Darcy): “Damn you! Damn you and damn everyone who won’t put a light in his window and stay up all night damning you!” Which I wrote down because it was so emphatically viciously perfect.

There is an awful lot of talk in certain political circles about what the “Founding Fathers” intended or would have wanted or whatever. I’m not going to get political here… but I’ll just put in this quote… Hamilton convinced George Washington to run for President because he “dreaded having a mediocrity at the top”. So, then… what is it the Founding Fathers, of the time when “The intellectual caliber of the leading figures surpassed that of any future political leadership in American history” would have wanted now…? “…The rift between Hamilton and Madison precipitated the start of the two-party system in America.” Thanks, boys. Thanks a heap.

Oh! One more amazingly relevant moment from the book: “At the end of his term, President Adams rushed through appointments for these judges, offending Republicans, who thought he should have allowed the new president to choose.” Hm.

Oh. And read this. http://joeposnanski.com/hamilton/