A Death by Any Other Name – Tessa Arlen 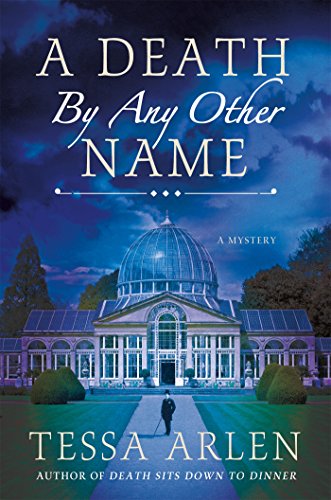 Wow, I made a lot of notes and highlights on this book – over 100. As I say all the time, this is either a sign of a good book or a terrible one.

They always warn not to quote from an ARC without checking against the published work – so I did. I was horrified by the comma abuse in the book, so I checked. And unfortunately, it’s still there. “Clementine smiled at the thought of her grandsons, it had been nearly six months since she had last seen them.” Run-on sentences, comma splices, all the usual things that make my eyes burn – it all appears to be unchanged from the Netgalley proof. It’s a little shocking that no one at what I thought was a pretty solid publisher got a handle on this nonsense. It ranges from the annoying (“he ate an entire dish of lampreys or what we would call eels” or “Good afternoon, I am Mrs. Jackson, you asked for me?”) to the unreadable (“Clementine blessed her husband’s unruffled and farsighted view, and his ability to put a firm foot down where Althea’s gadding-about was concerned and only prayed that her cousin Clarendon had the strength of character not to be persuaded otherwise by their strong-minded daughter.” Wut?)

A good editor taking some time to make this more readable would have rebuilt sentences like “Etienne is a generous man about how much time his wife spends with us.” Or, oh Lord, like “She relaxed, he was onboard then, but there would be a stipulation, of this she was quite sure.” Or “Clementine was not only too happy to answer his every question but with as much detail as she could provide.” Or “She felt quite uncomfortable by this outward expression of emotion.” (Felt uncomfortable by – ?) Or ” I know the kedgeree was not spoiled it could not possibly have been…” Or … so many more. The writing was demanding only in that it took some unraveling now and then to figure out not what was being said but what the author was trying – and failing to say.

When it didn’t border on gibberish, it could be awfully laborious. In one paragraph, someone was startled by a man’s sudden appearance, and jumped. Done well, this moment could be as startling to the reader as to the character – but not the way this was written, where it took three sentences.

It feels very broken-record-ish to add that there are also moments where the language felt wrong for this period mystery. “I don’t want you to get steamed-up” – why is there a hyphen, and why not find a solidly non-anachronistic way of saying “don’t get angry” (like “don’t get angry”)?

I wonder how one is supposed to pronounce the name of the home of Lady Montfort, Iyntwood. It’s so awkward in print – it made for a stutter every time I hit the word in my reading.

Unsurprisingly, there are other problems. There are two main characters, “Lady Montfort and her redoubtable housekeeper Mrs. Jackson”, and the author thinks nothing of head-hopping between them. Actually, one note I made was on what I called a head LEAP. Reading good writers, I never had a problem with this habit so many writing guides warn against; a good writer can, will, and does give you enough information to know whose thoughts you’re supposed to be reading at any given time. Tessa Arlen does not have that skill, and I lost count of how many times I had to reread a paragraph or a page because the point of view switched without warning from Lady to housekeeper. (This might – might – be at least partly down to Kindle formatting issues – but I don’t think so.) Even within the same point of view there were inconsistencies that were annoying – one moment it was “Lady Montfort”, and then in the next paragraph she was referred to as “Clementine” (it took me some time to figure out who the hell Clementine was the first couple of times it happened). This might have been a good way to differentiate the points of view – when it was with her, she could be called by name, in the housekeeper’s POV sections called by her title – but no.

And of course it was repetitious. When someone was attacked midway through, the story was told over and over, ad nauseam. I think I know why – there was a detail that the intrepid sleuths, and the determined reader, was supposed to pick up on. In fact, I did pick up on the detail – but I thought it was yet another poor choice of words by the author. Another aspect of this was over-use of words; “lovely” was used thirty-two times, usually in the same context.

I’m not sure if I’m supposed to like Clementine/Lady M or not. I think I am. But I don’t. She’s a bully. “Did [Mrs. Jackson] mind being involved in her inquiries? She had fleetingly pondered this before.” Only fleetingly, of course – what possible difference would it make if Mrs. Jackson objected? She was the help.

Since the book was largely about the breeding of roses, I would have rather expected to come away with a bit more knowledge about the subject than I had going in. This didn’t happen.

I’m genuinely surprised I didn’t rage-quit when I came across “a small flair of anger”. (I just checked – it’s in the final text.)

Or when the outbreak of WWI was referred to as “what a tempest in a teapot”.

Or when “chaffing” dishes were mentioned. (That’s still in as well.)

All this complaining accounts for maybe half my notes – and makes me wonder why on earth I gave this thing two stars. Reading over the run-on sentences I saved has been awful – how on earth did I finish this thing, and why? I’m knocking a star off, and will be avoiding this author like the plaguiest plague.

Like Loading...
This entry was posted in mystery and tagged A Death by Any Other Name, mystery, NetGalley, Tessa Arlen. Bookmark the permalink.

1 Response to A Death by Any Other Name – Tessa Arlen