OK, let’s get this thing back in gear.

Unfortunately, it’s with a DNF. 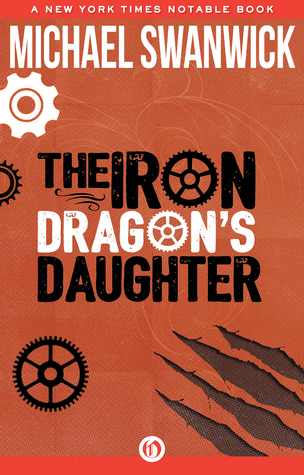 I enjoyed the beginning of this, although it confused me. I enjoyed the premise, and the dragon, and although the darkness and grimness of the setting had me on edge, I could appreciate the fact that it did so. If that makes sense. It wasn’t my preferred type of setting – I like there to be just a little light somewhere, and I admit I do prefer to like a character or two in what I’m reading – but it was well done and fascinating.

I was confused because it’s never explicitly stated where and/or when this book is set. There are elves and dragons and invisible boys, but one of the elves wears an Italian suit. I don’t recall any of the characters mentioned being plain vanilla humans (although I think Jane was perceived as one?), but the young ones (those not enslaved in factories, at least) still have to go to school. And the teind is a thing, treated alarmingly like The Bachelorette. But, again, I could appreciate the craft, whether I enjoyed it or not.

It was when Jane, our heroine who allies herself with the title’s iron dragon, gets out into the world and into school that the book took a sharp downward turn for me. It actually got darker and darker – the world that this is set in is a horrifying, dismal, dangerous, ugly place, and Jane – understandably not a sweet and wholesome girl to start with – adapts to the horror and darkness and danger in ways that made her more and more difficult to read about. A line which perfectly captured it was “For all that she’d had no great expectations for it, sex was turning out to be even more squalid, tawdry, and cynical than she had suspected it would.” I gave up somewhere around the 50% point, I believe – I just couldn’t push through. This is not due to the book – it’s a case of “it’s not you it’s me”. I just didn’t enjoy it. My decision about rating a book I don’t finish is always case by case. There are times I won’t leave a rating. If the book is dreadful enough that I can’t or just won’t finish it, I’m not going to hesitate to express that in the rating: it’s usually going to be a single star. If I fail to finish a book because it’s simply not to my taste, it’s usually two-starrer. I think I’m just going to leave this one starless – what I appreciated was very good. The rise and fall of the meryons was marvelous. I am sorry not to find out what happens. But I got out because I was beginning to feel soiled reading it.

Like Loading...
This entry was posted in books, fantasy and tagged dragons, fantasy, Michael Swanwick, Steampunk, The Iron Dragon’s Daughter. Bookmark the permalink.