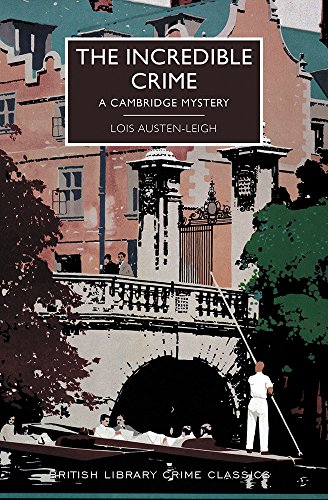 Much is made in the introduction to this reissued Golden Age novel that Lois Austen-Leigh is the granddaughter of Jane Austen’s nephew. And there were moments, reading this, that I caught a glimpse of the wit and language style of Jane, and wondered whether she was doing it on purpose for a few minutes here and there the thought did cross my mind that this was a bit like the sort of mystery Jane Austen would write, with wit and romance and cleverness. (It had the kind of cursing JA might have used had she been writing a hundred or so years later: “and what the something something ’ave yer to do with me?” Heh.)

But … the cleverness of the book seemed to falter in the delivery of the actual mystery, the “incredible crime”. In fact, I had a bit of trouble figuring out exactly what was meant as the “incredible crime”. There was a lot of circumlocution about smuggling drugs in the style of all the stories of past centuries, and a lot of exploration of whether it was sporting or not (which, the consensus was, it was when it was rum or such being smuggled, but not when it’s drugs), and who was involved, and was it okay if the drugs weren’t going to be marketed, and wait really who was involved … I was a bit – pardon the pun – at sea for big chunks of the book.

One reason for my state of I have no idea what’s going on was – I admit it. I skimmed parts of it, because there were a chunk devoted to my old nemesis, bridge, and several chunks spent on my new nemesis: fox hunting. I mean, I’m largely ignorant of fox-hunting – my impression being of rich and bored people riding roughshod over the countryside and people’s crops chasing a pack of hounds which are chasing a fox, jumping over fences, falling off occasionally, and, in the end, watching as the dogs tear the fox to pieces? I could be wrong. I’m sure there’s much more to it. Heaven knows the reverence with which the process was treated in this book indicates a deep culture behind the … sport. All I can say as a 20-21st century American is that when a character asks “Does it convey what it should to you, when I tell you that in five days’ hunting the hounds have made one six-mile point—point, Harry, and two seven-mile points?” I could only say “No”.

There is some extremely uncomfortable pre-feminism … stuff, particularly in men’s attitude toward silly and untrustworthy women (“Prudence’s first impulse was to point out to him the unwisdom of belittling the trustworthiness of women in general, to the woman he apparently proposed to trust”). I was mildly dismayed by the way Prudence, the initially strong and capable woman at the heart of the story, went down a rather Taming of the Shrew path. But at least she didn’t ride astride when she hunted.

I don’t know. I liked parts. There was some nice atmosphere, some nice characterization, some very enjoyable writing … but my mental image of the plot is of a huge tangle of that really fuzzy kind of yarn that loses its integrity in places and just becomes a puff. Was there smuggling? Of what? Who was that spy fellow, and could he be trusted? Who could be trusted at all? Was the puppy okay? And who killed the man who died very late in the plot, and why? It was a mess.

One note which might help the modern, baffled reader: “sported his oak” means “shut his door to indicate he wasn’t ‘in’ to visitors”. I must have seen that in the past – I must just never have looked it up before.

Quote I enjoyed:
“This is a very serious allegation that you are making,” said Colonel Marton hoarsely. “Do you quite realize what you are saying, I wonder?”
It was quite obvious that Mary did. “I don’t know about no alligators,” she said cautiously…

Like Loading...
This entry was posted in books, mystery and tagged Lois Austen-Leigh, mystery, NetGalley, smuggling, The Incredible Crime. Bookmark the permalink.