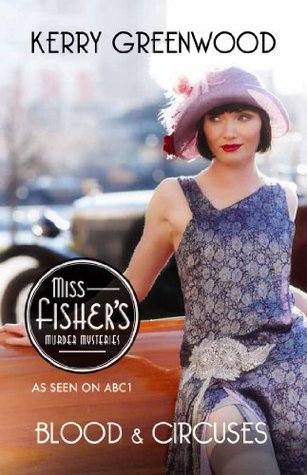 In my review of [book:The Green Mill Murder] I did a little bit of exploration of how very different the Miss Fisher tv episodes are from the books they’re based on. I was about to say that the changes didn’t feel quite so drastic in this one, until I remembered the very drastic change at the beginning. Yeah, there were great big changes; I guess it was a bit streamlined to make it easier to digest on television.

Another thing I mentioned in the last book was that I always seem to learn something from these books, and the same held true this time out. The bit about the human cannonball made me blink for a second, and then basically go “Well, sure.” And I loved the detail about circus trick riding – I’m a little sad that wasn’t the way they went with the tv show, because that would have been beautiful. Ah well.

A note on the horses – – I’ve said before that one area in which I always judge a writer is how they write horses. Kerry Greenwood did a nice job. They had names, and gender-specific pronouns were used. I approve.

I’m still a little disappointed and disoriented by this, the original, “real” Inspector Robinson. It took a minute, but once I finally adapted, I enjoyed him. The Shakespeare quotes that pepper this one helped – how can I not love a man whose response to someone being upset at police in her home is “‘Oh, woe, Alas! What, in my house?'”

Lizard Elsie, Miss Parkes, the circus folk – these were some wonderful characters. Miss Fisher is a potent enough force to carry the whole series on her own if she had to – though she’s not invulnerable, and I like that and her awareness of the fact – but she is surrounded by lovely juicy characters who are all immense fun to read, both the series regulars and the guest stars. Love it.

Like Loading...
This entry was posted in books, mystery and tagged Blood and Circuses, Kerry Greenwood, mystery, NetGalley, Phryne Fisher. Bookmark the permalink.