Posted on September 7, 2017 by stewartry

Phew – it’s been a minute since I’ve done my duty and posted a review. I am absolutely going to blame terror of being nuked into the Stone Age; I’ve spent a lot of time over the past weeks playing mindless computer games and feeling sick.

That’s not the sole reason, but it’s the one I’m going with. Blame the current administration for everything possible, that’s my motto. So: On Copper Street. Not a great book to open the month with, but it’s overdue. 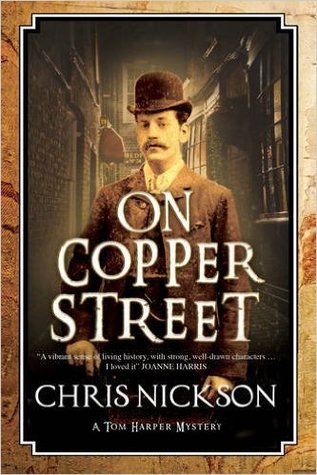 It’s surprising how little I remember of this book. I think I had pretty much forgotten the bulk of it within a little while of closing it for the last time. It made very little impact on me as I was reading it; I do remember it being a bit of a slog. Thank goodness for Kindle notes and highlights.

The writing was not difficult, by any means – I can’t point to anything much wrong with it. It was perfectly adequate; it was just opaque. The style was frequently choppy. There was a fair amount of statements of the obvious, and some moments which annoyed me deeply. Example: one of the key events at the beginning of the book is a man’s senseless attack on a boy in which acid is thrown in the young victim’s face. I think the strongest emotion I felt in reading this book was the disgust I felt when a character (which character I don’t know; I didn’t make a note) remarks sorrowfully on how the boy will be reminded of the attack for the rest of his life, “‘Every time he looks in the mirror—'” The problem with this is that the boy would never be looking in another mirror in his life – or into, upon, or at anything else: he was completely blinded in the attack. The character who said it knew the facts of the situation, and no one around him reminded him of how horrendous that sentence had been.

I was also pretty disgusted when some papers went missing – my note on the text was “are you telling me they were the originals”? They couldn’t exactly Xerox whatever it was in 1895, but it seemed hard to believe that valuable and important papers were made as vulnerable as these were. It was stupid things like that which shaved away at the rating of the book. It wasn’t actively bad – hence three stars … it just wasn’t better than average.

I didn’t feel any sort of connection with any of the characters. Detective Inspector Tom Harper held next to no interest for me, and I couldn’t muster much concern for his family and friends, or his enemies, either. Harper’s wife was a suffragist, and would absolutely have burned her bra if bras had been worn in 1895 – and I didn’t buy it. There was no believable passion, just an occasional dollop of anachronistic-feeling discourse.

Again, hurrah for the ability to save bits and make notes on my Kindle, because without that crutch a book like this would vanish into some dusty and cobwebby recess of my brain. As I imagine it will five minutes after I hit “post” on this review.

Like Loading...
This entry was posted in books, mystery and tagged 1895, Chris Nickson, mystery, NetGalley, On Copper Street. Bookmark the permalink.