(This is my 900th post on this blog! Since February of 2009 I’ve been burbling away on here – someday I should figure out a total word count. I can just hear Carl Sagan’s voice: “Billions and billions…)

Many many moons ago, I worked at a local Barnes & Noble – which was the equivalent of putting a cat in charge of a patch of catnip. Between a 30% employee discount and the occasional availability of stripped books, my personal library redoubled. I had to touch basically every book in the place in any given week as we put shelves back together after a long day of customers tearing them apart – and the section in most need of attention, of course, was the picture book section. (It was not uncommon for the manager of the children’s department to have to call in authorities, as parents would dump their kids off in front of the shelves and go see a movie at the theatre down the road. Of course, even theoretically supervised children did a lot of damage. But I digress.) It was while trying to restore order one evening that I came across [book:If You Give a Mouse a Cookie], and I was instantly completely charmed. I didn’t buy myself a copy, though … I wonder why. 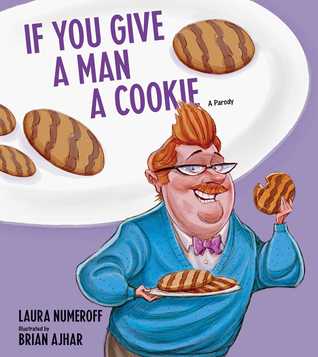 Now, almost thirty years after Mouse was first published, comes a new book from Laura Joffe Numeroff for all those folks who grew up with the mouse, the cookie, and the ramifications of giving one to the other, and who are now married. It’s the same sense of humor, only now aimed squarely at the grown-ups: “If you give a man a cookie, he’ll ask for some milk to go with it … God forbid he should get it himself!”

I’m completely in love with the vivid, adorable illustrations. The cookie-getting man reminds me of a much rounder Greg Proops, shown as exasperating and ridiculous without making him a complete buffoon. And it pays to pay attention to the dog, who appears in every picture with his master. (The man can’t be as big a jerk as all that, introduced as he is playing with the dog. But he is a twit.) My only regret, and it’s on me and not the book, is that for some reason it felt like this would be one of those picture books where close examination of the illustrations would turn up little visual puns or gags or other kinds of hidden surprises. It doesn’t – except for the fact that the dog is the subject of every “photo” shown in the house, framed or hung on the fridge.But that’s a quibble. If you give a woman adorable, she’ll want puzzles too.

I love that this was targeted at adults without resorting to vulgarity or non-G-rated language (except for a non-equine use of “ass”). A child, attracted by the illustrations, could absolutely read it safely – but it would whoosh over his head.

I wonder if there will be a follow-up, like [book:If You Give a Moose a Muffin]. Because if you give a woman a book she likes, she’ll ask for another one. (God forbid she should write one herself.)