It was a foregone conclusion that I would be requesting a book calling itself Anne of Green Gables. I have loved Anne since I was twelve, and I still reread at least this first book, if not the whole series, just about annually, when I need comfort books. So – well, obviously if I see a graphic novel based on AoGG I have no choice — but I do have trepidation.

Actually, I had to work a bit to be able to read this, since I couldn’t see half the pages of the file I received. I had to download it several times, contact Netgalley customer service (and wasn’t that a treat), and finally download a whole new program to read it with. I almost gave up bothering several times, because – really, was it going to be worth all the effort?

First impression: I’m incredibly disturbed that L.M. Montgomery’s name does not appear on the cover of this graphic novel. I don’t know if some designer wanted to keep the front cover “clean”, or … no, I can’t make up any more spurious reasons. But Lucy Maud Montgomery – you know, the woman who wrote the book this graphic novel is based on? – is nowhere. Wait – there’s a dedication. That’s nice. But I don’t care how long a book has been in the public domain, I don’t care whether it’s legally required or not – if you’re using another author’s work her name belongs on the cover. At this point in time, of course, AoGG is in the public domain – but a labor of love, which this very much seems to be, ought to also show the utmost respect for the author.

I find this especially surprising since the text of the graphic novel is very faithful the book, often using original wording. (I’ve read it enough that I can very easily tell.) That’s a definite plus, and very much a reason for as high a rating as I’m giving it. 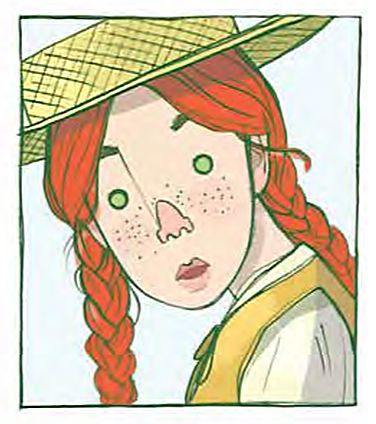 Second impression: and I don’t like saying this about the work of a young artist, but – my God, some of the artwork is ugly. I should probably say simply that it’s not to my taste, shouldn’t I … anyway. Initially trying to read the book, I found half of the pages to be blank (apparently my slightly ancient laptop’s fault, according to the enchanting “Netgalley concierge” I dealt with). And the artwork I could see was one reason I very nearly didn’t bother with all the calisthenics I had to go through to read the whole thing. 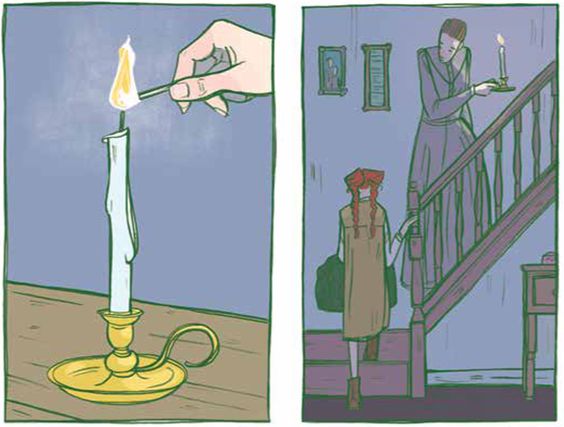 Second impression of the second impression: it’s by no means all ugly. There are some lovely touches; while the coloring is acidic and unsubtle and not very pleasant, the settings are beautifully rendered; figures are expressive and graceful. Anne’s maturation is prettily handled. In the end, really, the main thing that creates an impression of ugliness about the art (besides some of the color choices) is the rendering of characters’ noses. I mean – I get it. Noses are hard, second only to hands (which the artist does rather well). But this – between the shapes used and the choice to frequently make noses a different shade from the rest of the face – no. Maybe this is why the following exchange does not appear:

“And oh Marilla, Jane Andrews told me that Minnie MacPherson told her that she heard Prissy Andrews tell Sara Gillis that I had a very pretty nose. Marilla, that is the first compliment I have ever had in my life and you can’t imagine what a strange feeling it gave me. Marilla, have I really a pretty nose? I know you’ll tell me the truth.”
“Your nose is well enough,” said Marilla shortly. Secretly she thought Anne’s nose was a remarkably pretty one; but she had no intention of telling her so.

That makes the artwork all the more sad to me. 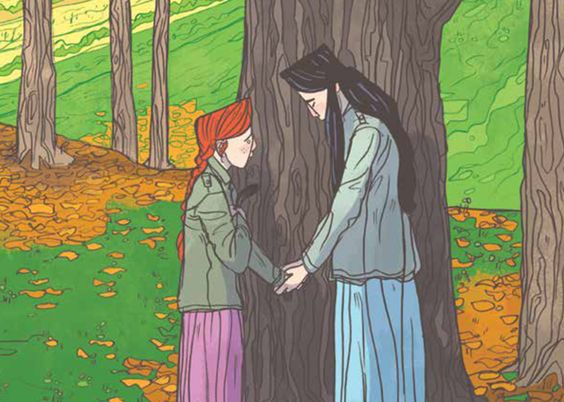 My other complaint about the artwork is … and I mean this as a serious question, not sarcasm … did Brenna Thummler ever read the book? And regardless of whether she did, did no one who knew the book ever review her pages before it was too late? Because while I was pleased with how well the book was boiled down to fit into a 232-page graphic novel and still stay faithful (if nearly uncredited), the depictions bothered me rather often. Matthew sitting around in his stocking feet? Anne barefoot all over the place, and coming down in the morning stretching and yawning? Mrs. Lynde reacting to seeing Matthew heading off at the beginning with a “huh”? No. It’s along the same lines as Peter Jackson’s decision to insert fart jokes throughout his Lord of the Rings movies – I’m pretty sure the person who created the original work would be horrified. I also questioned why Diana was shown as considerably taller than Anne, when the latter is described as being tall several times throughout the book, while Diana’s height is never remarked on as far as I can remember.

But the thing that made me … well, I’ll be honest, it made me very slightly angry (because if you’re going to take someone’s work you ought to at least pretend to pay attention) was this: 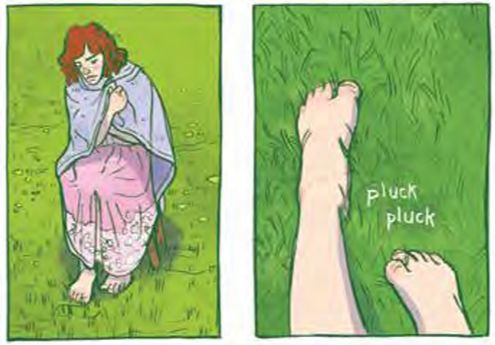 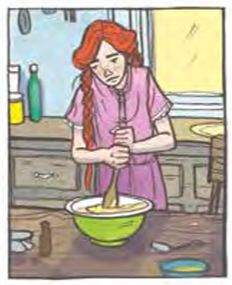 “And isn’t pink the most bewitching colour in the world? I love it, but I can’t wear it. Red-headed people can’t wear pink, not even in imagination.”

Well, they can in graphic novels, I guess.