The Voyage of the Dawn Treader – C.S. Lewis, Chrissi Hart

I’ve gotten distracted from this series; I need to go back and keep working through it. There’s just so much to listen to … Anyhow. Here Peter and Susan have lost the ability to go to Narnia, and can all we nerdy, geeky adults have a moment of silence for how awful that is? Because they have grown up too much, because they have lost the wide-eyed accepting nature of children, they can no longer find the way – and if I’m remembering right, they don’t mind so much; they were just a little sad.. I can’t believe I wouldn’t be having a complete meltdown over the inability to go back.

It’s a heartbreaking idea, that loss – and a strange idea, coming from a spiritual man who is most famous for showing children a magical world.

Brief note: the line “It might be giants” made me chuckle. For a couple of reasons. And now “Birdhouse in Your Soul” is going through my head. (Here’s the video, for no reason in particular. Enjoy.) 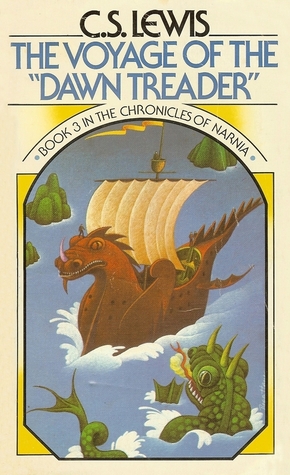 This installment in the Narnia series reminded me of, of all things, the original Battlestar Galactica. A ship (ok, in BG it was a ragtag fugitive fleet) all alone in the big sea (in BG, space), stopping here and there (islands here, planets in BG) for various reasons and having adventures, each adventure all but completely separate from the next and the previous. (Reepicheep is clearly Starbuck. No, he’s not, I, just felt I had to say that.)

The early chapter in which the children are captured into slavery was deeply creepy from the perspective of an adult of the 21st century. Caspian is bought by a man “because of his face”, and upon being freed and taking charge seems to rather take his time tracking down the others. All I could think while he was throwing his weight around with His Sufficiency was that in a more realistic scenario the odds were good that Lucy and probably Eustace as well would have already suffered things not suitable for a children’s novel. What in reality would result in emotional and probably physical scarring and decades of PTSD all ends rather cheerfully, with a bit of retribution for the real baddies, but total forgiveness for a select one or two. Maybe Lewis was right, and Narnia is only suitable for children…

Proof that it’s good to have friends in high places: Caspian promptly puts a man in charge just because the man knew his father … despite the fact that the man bought him as a slave without batting an eyelash. Well, hey, the reason the man bought him was because Caspian reminded him of the king. Which … makes things even creepier, actually.

It’s great fun to see what a piece of work Eustace is. He’s horrendous – worse even than Edmund ever was. (Are all Lewis characters whose names begin with “E” initially horrid?) And it’s rather fun that the others don’t suffer him gladly. Edmund is more tolerant than some, because he knows what he used to be, and Lucy is kindness itself – but coping with that big a Jonah on a confined ship tells even on them. That’s one of the best things about these books, the depiction of self-centered and hateful personalities (with Lewis pulling no punches) being opened up and redeemed. I can think of a few people I’d love to send out on the Dawn Treader in hopes of the same result – but I doubt it would work … And anyway, they’re adults, and therefore barred. Actually, they probably never could have gotten into Narnia in the first place (and probably never have, even on the page).

Yes, I definitely have to pick this series back up again.

Like Loading...
This entry was posted in books, Children's/YA, fantasy, Favorites and tagged C.S. Lewis, Chrissi Hart, Chronicles of Narnia, Narnia, The Voyage of the Dawn Treader. Bookmark the permalink.