See? I said my LotR reread is still ongoing. Bitter despair will not stand in my way!

I’ve talked about Chapter One before, but … So what? I really intended not to spend any time on “A Long-Expected Party” here at all … and then I found myself writing about it. Because it’s so good.

First, though – even though the prologue is not included in the audiobook I’m listening to, I have to highlight one bit (emphasis mine).

… it has been supposed by some that ‘The Scouring of the Shire’ reflects the situation in England at the time when I was finishing my tale. It does not. It is an essential part of the plot, foreseen from the outset, though in the event modified by the character of Saruman as developed in the story without, need I say, any allegorical significance or contemporary political reference whatsoever.

I mean, I know. I get it. People already complain about the fact that there seem to be multiple endings to the film, and by the end of however many hours that third hideous film was, people just wanted to get out of the theatre. But … now I’m trying to remember where the quote in my head comes from, and can’t: “Still – that don’t make it right!” 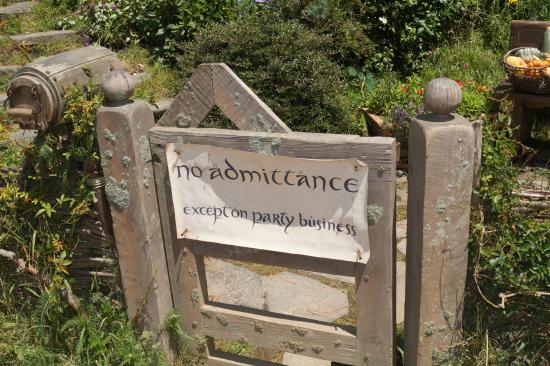 But that’s the end of the story. Back to the beginning. And it’s a beautiful beginning. Have you met Bilbo Baggins? Whether or not you have, here he is in all his well-preserved glory – and if you have met him before, this is how long it’s been since then (for him). And right away the setting begins to take on color and shape, as we drop in on a gathering at the Ivy Bush – not the famous Green Dragon. Just for fun I checked: the Green Dragon shows up in the book five times, and the Ivy Bush only twice (once in conjunction with the Dragon). (The bypassed and lamented Golden Perch is – well, it’s irrelevant that it was mentioned three times, since we never get there. I don’t know that I ever pondered it before – that’s perch as in fish, I assume? I think as a kid I might have had an image of a parrot’s perch – perhaps in a gilded cage …And don’t tell me the Professor never thought of that.)

‘Elves and Dragons! I says to him. Cabbages and potatoes are better for me and you. Don’t go getting mixed up in the business of your betters, or you’ll land in trouble too big for you, I says to him.’ – The Gaffer.

I’m not sure if this connection ever leaped out at me before, but here the Gaffer sounds like Polonius. “Neither a borrower nor a lender be! Don’t go getting uppity or you’ll regret it! Don’t go messing around with royalty or they’ll get stabby!”

‘Mr. Bilbo has learned him his letters – meaning no harm, mark you, and I hope no harm will come of it.’ Well, no harm does come of it as far as we know, and no good directly either – but what harm did the Gaffer think might come of learning to read and write? I hesitate to make another parallel, especially to current right-wing incumbents, but … in the past two years and change I have been shocked at the level of animosity there is out there to people who seek education. And it’s sad to see the same thing here. I find it surprising, I guess, that given his own way the Gaffer would never have had Sam learn to read. Maybe just because he expected Sam to follow in his footsteps and garden for the Bagginses forever; he’s been doing it for over sixty years, since he was a lad, and his uncle Holman before him, and to think that that continuity might be broken could be alarming. Hobbits not being particularly fond of change and innovation, as a rule. 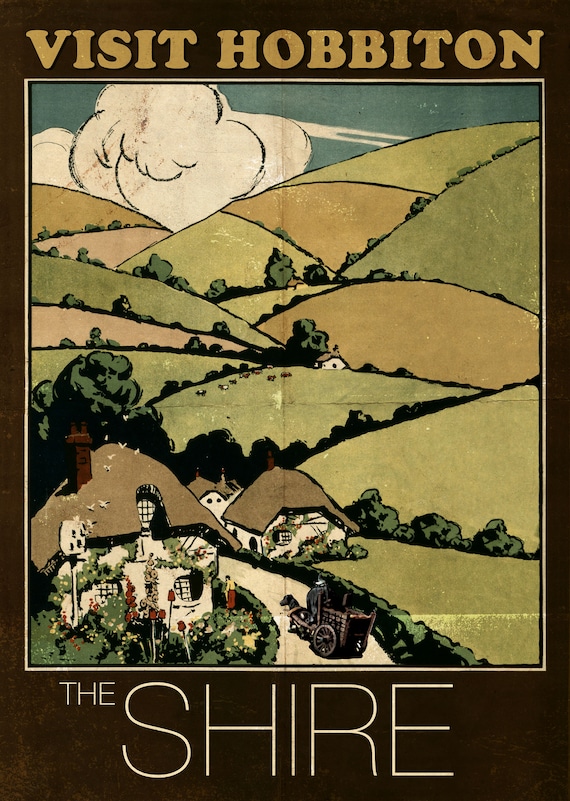 I love that in that little scene the unnamed stranger who pipes up gets put in his place by the Gaffer. We can talk smack about our Mr. Bilbo, because he’s ours – just you pipe down, you Michel Delvingite.

Ted Sandyman, the miller, is introduced early on too, and while what he says doesn’t seem so awful, the Gaffer’s reactions to him indicate he kind of is. And he’ll be back, more’s the pity.

The Party is Much Anticipated, and happily the weather stays fine despite threatening clouds. There are “dwarves and other odd folk … quartered at Bag End” – who?? They’re mentioned in the same breath as the cooks drafted (draughted) from “every inn and eating-house for miles around”; are dwarves known for their cooking?

The party is one area where I can’t argue with Peter Jackson. Ian McKellen as Gandalf scuttling about with fireworks and chuckling – and dancing! – just makes me happy.

‘Why, I feel all thin, sort of stretched, if you know what I mean: like butter that has been scraped over too much bread. That can’t be right. I need a change, or something.’
Gandalf looked curiously and closely at him. ‘No, it does not seem right,’ he said thoughtfully.

Bilbo seems to just think this is a symptom of being a somewhat sedentary centenarian (!) – but it gets Gandalf’s attention. (“Sedentary” as in he hasn’t left the Shire in years, if not decades – not “sedentary” as in he sits in front of a computer and writes about the books he’s read all day. Maybe “stationary centenarian” would be better.) Gandalf has come here in part to probe a little deeper into the weird little mystery that is Bilbo’s pretty souvenir. “You are always badgering me about my ring,” Bilbo says; Gandalf replies, “I had to badger you … I wanted the truth”. So yes, he pestered Bilbo into telling him the truth back during the journey where it was found – but Bilbo’s accusation makes it sound like he has continued to ask about it through the decades. Because, after all – “Magic rings are—well, magical; and they are rare and curious. I was professionally interested in your ring, you may say; and I still am.” Gandalf being who he is, he knows about what magic rings should and should not be out and about in the world. For all the reader knows, any traveler might stumble over a piece of magical jewelry at any time; until we learn more, they might well be thick on the ground. If you’ve read the book a couple dozen times, and then (FINALLY) read The Simarillion, then you start to get a better idea of what Gandalf is thinking here. Because magic jewelry is not thick on the ground, and feeling “stretched” is not a normal product of being eleventy-one and settled.

‘Now, now, my dear hobbit!’ said Gandalf. ‘All your long life we have been friends’. But … they didn’t know each other before that lovely morning when Bilbo awkwardly invited him to tea. Each knew of the other, but they’d never spoken before, as far as I recall.

Bilbo’s unexpectedly violent reaction to Gandalf’s gentle push begins to confirm all of Gandalf’s worst fears. What an extraordinary scene. “Precious”, indeed… It’s so like other sci-fi or fantasy scenes where a parasite of some kind reacts to attempts to separate it from its host. All of which it predates, may I add. But the moment he gives it up, Bilbo feels better. (This might be a point at which the analogy to addiction fails; if you give up smoking or heroin or what-have-you, you’re probably going to feel a lot worse before you feel better.) A little while later, when Frodo comes in and frets a bit after Bilbo, Gandalf tells him “Don’t be too troubled. He’ll be all right—now.” He’s not sure what he knows – but he knows enough to know that. 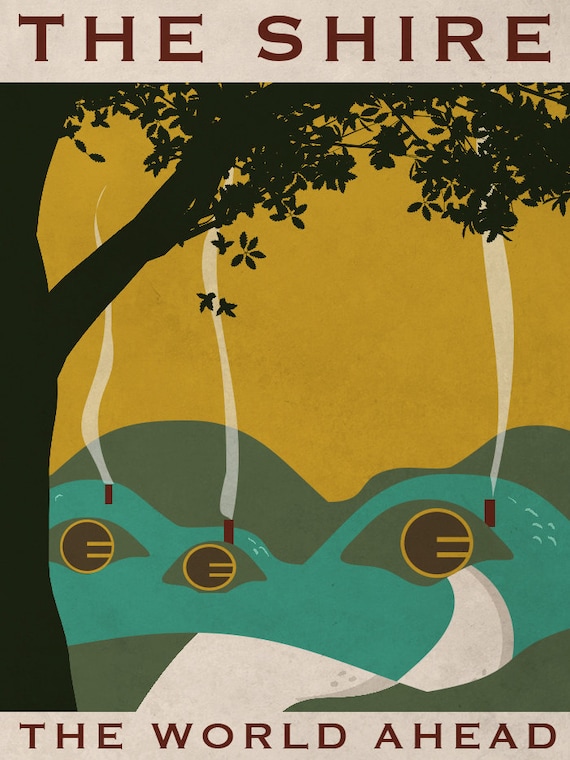 It was a fine night, and the black sky was dotted with stars. He looked up, sniffing the air. ‘What fun! What fun to be off again, off on the Road with dwarves! This is what I have really been longing for, for years! Good-bye!’ he said, looking at his old home and bowing to the door. ‘Good-bye, Gandalf!’

Why … yes, actually. That’s exactly what I’ve really longed for all these years.

Anyhow. Although he had planned to stay a while and help Frodo with Post-Party cleanup, now that Gandalf has seen Bilbo’s reaction to prodding about giving up the Ring, and his reaction to actually giving it up, he determines to take off immediately to go do research to see if he can check his hunch. He has a bad feeling about this.

‘…Look out for me, especially at unlikely times! …’

Frodo saw him to the door. He gave a final wave of his hand, and walked off at a surprising pace; but Frodo thought the old wizard looked unusually bent, almost as if he was carrying a great weight. The evening was closing in, and his cloaked figure quickly vanished into the twilight. Frodo did not see him again for a long time.

So much happens in this one seemingly mild-mannered chapter! Absolutely all the necessary foundation is laid (in an extremely engaging manner), with just enough foreboding to make the reader worry a little in the next chapter, during the giveaway jocularity.

Sixty years it’s been since the adventures of The Hobbit took place. At the time, Gandalf’s interest was caught by the fact that Bilbo lied about where he found that odd little ring (which, as I think I noted in one of my other “hey I’m rereading LotR” posts, is still lower-case-r “ring”). As time has passed, he has not forgotten about it – but he’s had other things to worry about. Now, though – now he has seen Bilbo tested, in a way, and Gandalf’s gears really start turning. Oh, yes – he’ll be back.

(I confess – I couldn’t resist using Middle-earth travel posters found on Etsy to illustrate this post. I’ve linked back to the original listings – I’d buy them all if I could, but since I can’t, here’s a tiny bit of exposure. If any of the images are yours and you’d like me to take it out of the post, please let me know and I’ll do so immediately.)

Like Loading...
This entry was posted in books, fantasy and tagged An Unexpected Party, J.R.R. Tolkien, LotR Reread, The Fellowship of the Ring, The Lord of the Rings. Bookmark the permalink.