LotR Reread: The Shadow of the Past (Prologue)

As for any inner meaning or ‘message’, it has in the intention of the author none. It is neither allegorical nor topical. As the story grew it put down roots (into the past) and threw out unexpected branches: but its main theme was settled from the outset by the inevitable choice of the Ring as the link between it and The Hobbit. The crucial chapter, ‘The Shadow of the Past’, is one of the oldest parts of the tale. It was written long before the foreshadow of 1939 had yet become a threat of inevitable disaster, and from that point the story would have developed along essentially the same lines, if that disaster had been averted. Its sources are things long before in mind, or in some cases already written, and little or nothing in it was modified by the war that began in 1939 or its sequels. 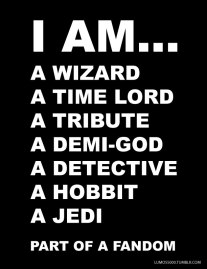 I feel for Professor Tolkien. He was accustomed to being published, as an academic, but now abruptly his world was cracked open and exposed to the world at large – the great unwashed. These stories which he’d told only to his children, which he had only shown certain trusted friends, were now public property, and … Let’s put it this way. I’m deeply proud of being what I’ve always called a geek, what others call a nerd. So many of the others I’ve known who love the same things I love have been wonderful people – funny, smart (sometimes brilliant), creative … but I’ve also been to Star Trek conventions and seen the skin-tight uniforms worn by people who really should avoid skin-tight, and I’ve heard the ridiculous questions people feel compelled to ask the actors. (“In episode ( ) the Enterprise traveled 1,701 light years in six days at warp 6, but then in episode ( ) it took only three days to travel 1,861 light years at warp five; did the density of the space-time continuum have an adverse affect on dilithium crystal output?” Which is not an actual example, but not too far off, from what I remember.) I never have been able to figure whether the questions come from a (deeply mistaken) belief that the actor would know everything his character would know and remember every detail of every episode they were in decades previous … or if it they come from a desire to show off. Probably both, depending.

And, of course, fans – and critics – will insist on finding, or attributing, meaning where the author intended none. Fans (and critics) can be a right pain.

Tolkien’s WWI experience was horrific, of course. He was at the Somme. It would be impossible for that not to color every part of his life, including his writing – but it didn’t inform it. The story is the story, not a cordially-disliked allegory.

But I’d bet money that someone has gone line by line through LotR and tried to dig out the WWI influence. “But I cordially dislike allegory in all its manifestations, and always have done so since I grew old and wary enough to detect its presence.” (I use that quote a lot, myself.)

I shall return, to talk about the actual book.

Like Loading...
This entry was posted in books, fantasy, Favorites and tagged Chapter 2, J.R.R. Tolkien, LotR, LotR Reread, The Lord of the Rings, The Shadow of the Past. Bookmark the permalink.

2 Responses to LotR Reread: The Shadow of the Past (Prologue)