Look, I’m back! *pause for amazement*

So when last I left the lads, they were sleeping under a tree being marveled at by a fox. They were still in the Shire, so they didn’t feel any need to keep watch – that is probably the last outdoor night any of them will spend on this journey with that much peace of mind. (Mistaken as it actually was.)

I like the playfulness of everyone getting up, Pippin teasing Sam, Sam blearily falling for it, Frodo roughhousing with Pip. They’re still in the Shire; only Frodo is supposed to know the full extent of the adventure they’re starting out on; it’s still a walk for the pleasure of it, for a few more hours.

See, all of this is why I was so totally on the “trust Peter” bandwagon in those glorious early days when the movies were still in the works, and after FotR came out,. There is Sam, looking wide-eyed at a landscape a step beyond the world he knows so well (“If I take one more step, it’ll be the farthest away from home I’ve ever been”); and then of course:

‘ He used often to say there was only one Road; that it was like a great river: its springs were at every doorstep, and every path was its tributary. “It’s a dangerous business, Frodo, going out of your door,” he used to say. “You step into the Road, and if you don’t keep your feet, there is no knowing where you might be swept off to. Do you realize that this is the very path that goes through Mirkwood, and that if you let it, it might take you to the Lonely Mountain or even further and to worse places?” He used to say that on the path outside the front door at Bag End, especially after he had been out for a long walk.’

In that moment in the theater, or at least in that moment that I realized that the quote was exact and perfectly used, I was positive we were in great hands. Betrayal is the worst.

‘I wonder if that is Gandalf coming after us,’ said Frodo; but even as he said it, he had a feeling that it was not so, and a sudden desire to hide from the view of the rider came over him.

– Interesting. That sudden desire certainly didn’t come from the Ring; quite the opposite, I would think. “There was more than one power at work, Frodo.” Or … wait. Given the next moment, when “A sudden unreasoning fear of discovery laid hold of Frodo, and he thought of his Ring” – maybe it wasn’t that other Power after all. Hm. Tricksy.

Right here is one of my favorite songs in the book. I love everything about it – and I’ll make an admission: when I kept a diary in my teens, I very often ended entries like I did my last post, with “‘And now to bed! And now to bed!’ sang Pippin in a high voice.” This is how thoroughly woven LotR has always been in my life – and this is why it’s so strange to think about all these years I haven’t been able to read it. (For which read also: this is how big a geek I have always been.)

And then comes another dark rider, or the same one again. The sniffing that Pippin is so obsessed with is definitely a creepy, creepy detail – and so is this: The black shadow stood close to the point where they had left the path, and it swayed from side to side. Frodo thought he heard the sound of snuffling. The shadow bent to the ground, and then began to crawl towards him. Bleurgh. Swaying and crawling – and if it hadn’t been for Elf ex machina (Elvis ex – no. Bother), they would have been in serious trouble.

But the Elves do approach, and the language is exquisite. I wonder why Frodo didn’t want to draw their attention; respect? Caution? But Gildor Inglorion notices them there, and calls Frodo by name. (I just typed that, and went back to correct myself, because one of my favorite Barbara Hambly characters’ names has got to be inspired by this chapter – but that wonderful wizard is Ingold Inglorion, so I was actually correct.) Pippin immediately seizes a chance to ask about the Black Riders, and news of them disturbs the Elves; they decide to break with custom and take the Hobbits along with them.

“Sam was speechless.” That will happen when you are suddenly granted a dear wish, or so I hear. “Sam walked along at Frodo’s side, as if in a dream, with an expression on his face half of fear and half of astonished joy.” Yes. And that’s why I love Sam best. 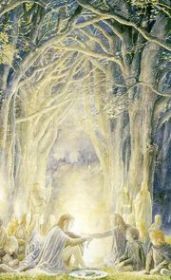 Again, the language used in these passages about the Elves is just beautiful. It struck me last night, listening to this chapter, that this is where Tolkien began to ruin me for reality. You see, while somewhere out there there might be a road through a wood down which I could safely walk at night and sleep beside when I tired without being a) robbed, b) raped, or c) arrested… But nowhere out there is there a road on which I might meet a band of Elves, High or otherwise, wending their way with a light about their feet and singing as they went. I think I said it last time – Tolkien desired dragons, and Sam and I desire Elves. Lucky Sam.

The Elves apologize for the “poor fare”, and Frodo replies “It seems to me good enough for a birthday-party.” Which, considering the birthday party described in the previous chapter, is high praise indeed. I think this is the first time Tolkien introduces one of those beverages which makes everything I can get my hands on bland and intolerably boring. …”A fragrant draught, cool as a clear fountain, golden as a summer afternoon” … Yes, please.

Interesting that they all sit around the fire either on the ground or “upon the sawn rings of old trunks” – it had just crossed my mind that they might use logs as benches or something, and then I thought “Nah – not Elves”. Well. Maybe the trees died naturally.

Gildor is surprisingly (to me, at least) vague. He does not specify where he has seen Bilbo since his farewell (which of course is intended to give Frodo and the reader a nice surprise in a little while). He would not give him details about the Black Riders – and in fact says the only thing which could possibly have made the situation worse: if I told you what I know, you’d be too terrified to go on. Hey, thanks. That’s helpful. Go not to the Elves for information, for they will say much and nothing at all. After one of my very favorite exchanges of adages (far better than mine), he finally warns Frodo to keep moving, with or without Gandalf – but I wonder if Frodo would have been able to get into Rivendell on his own. From The Hobbit and from something I seem to remember Gandalf saying it’s not as simple as crossing a bridge.

Samwise is so very me during this chapter. He refuses to go to bed like Pippin, choosing instead to sit at Frodo’s feet and hope to see and hear everything and not miss a moment of this amazing first meeting with Elves … and then he falls asleep. Or – *cue dramatic music* – – does he?? (Seriously, though, I can’t see S. Gamgee faking it.)

I wonder if Gildor’s lack of bedside manner, if you will, is due to an overestimation of Frodo’s heart. Or maybe it just seems to be that, given his bluntness (“No, seriously, dude, these Black Riders? So evil. You’re pretty much hosed, little dude”), but it’s actually just the right push Frodo needs to put his head down and go. (Go wrong, as the case may be, but in the end it’s right.) (That seems to happen a great deal – it’s the wrong way, or the wrong time, or otherwise not right – and it turns out better than if the “correct” path had been followed at the “correct” time.) (See the supplemental post…)

“‘But my heart forbodes that, ere all is ended, you, Frodo son of Drogo, will know more of these fell things than Gildor Inglorion. May Elbereth protect you!'”

In fact – yes, probably. Long-lived (forever-lived) as Gildor as one of the High Elves must be, he will probably have been wise enough (and lucky enough) to avoid going to some of the places and meeting some of the creatures Frodo will go and meet. Pippin especially of the three of them will get a crash course in Orcs. And yes, Frodo will before too many more days go by learn far more about the Black Riders than is generally advisable for one’s health.

I have a feeling that in a more current fantasy novel Elves met by chance like this would have a more major impact on Our Heroes. They would give valuable advice (instead of grudgingly little of anything), or leave them with a valuable artifact that would come in very handy later (instead of with breakfast), or one of the Elves would join the hobbits and be part of the proto-Company from then on. But Tolkien, being the creator of tropes and trends, doesn’t see any need for the Elves to be anything but a welcome rescue from the Black Rider, a beautiful half a chapter, and then gone.

Frodo finally begins to fall asleep – and as no mention of Samwise is made, this is probably where he has his moment of conversation with the Elves. Which doesn’t come up till Chapter 4. Which I might actually get to!

In the meantime, here’s a parody that would have gone well a chapter or so ago, but I forgot…

Cabbages and Taters
A parody of “Proud Mary”

Sam:
Left a good job in the Shire
Workin’ for the Baggins clan since I was a kid
Haven’t ever lost one minute of sleepin’
Worried ‘bout anything the Big Folk did

Been a lot of places through the Shire
Been to all the pubs, know the folks real well
Was settlin’ down like my Gaffer before me
Till I went and overheard what ol’ Gandalf did tell

Thought I’d get turned into a lizard
Never saw the old wizard riled up like that
Instead he made me promise to stick with Mr. Frodo
I knew that there’d be trouble right off the bat

Taters
Taters
Cabbages and taters
………………………………………..
Lots of people have recorded this one – if you choose to put Tina Turner’s voice in Sam’s mouth, I won’t take responsibility.

Like Loading...
This entry was posted in Favorites, Geekery and tagged Chapter 3, FotR, J.R.R. Tolkien, LotR, LotR Reread, The Fellowship of the Ring, The Lord of the Rings, Three Is Company. Bookmark the permalink.