The most tragicall comedie or comicall tragedie of Anonymous

I’m a Stratfordian, which means that I have no doubt that Shakespeare wrote Shakespeare: Occam’s Razor – there is no reason to question it. But I have to say, some time back there was a PBS presentation outlining the claim that Edward de Vere, Seventeenth Earl of Oxford, actually wrote the works attributed to one William Shakespeare, and that said Will was merely an actor plucked from the ranks to provide a face, an embodiment for the noble who had to remain (wait for it -) anonymous. It was most diverting. I enjoyed the argument – it was fun. It was all hooey, but it was fun. People have devoted years, if not lifetimes, to winnowing out references in the plays and poems which tie directly to Edward, and there’s an impressive dossier.

Of course, people have also devoted years, if not lifetimes, to “proving” that the plays and poems were actually written by Ben Jonson. Or Queen Elizabeth. Or, for all I know, the same aliens which built the pyramids. 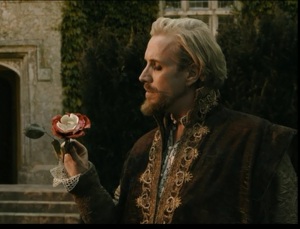 As I said, though, the Oxfordian theory as presented there was very entertaining.

This flick had little to do with the Oxfordian theory. Truly, not a single piece of evidence that actually made me think was in evidence here. And, in fact, this was not an example of Oxfordian theory, I was surprised to discover. Apparently, within the discredited fringe group of Oxfordians there is a sect that is fringe to the fringe, discredited among even Oxfordians, who espouse something called the Tudor Prince – or Tudor Rose – theory. That was what this was. It leapfrogged directly over eccentric into lunatic.

I will say in all fairness that it was beautifully filmed. The long shots of London – the Globe, London Bridge, Elizabeth’s funeral – were stunning; that would have been worth seeing on the big screen if I’d been willing to pay money to see this. The costumes were wonderful; the sets were gorgeous; many of the actors were excellent. I did enjoy the depiction of the plays being first seen by an audience; whoever those behind the film think actually was the Bard, Bardolatry is alive and well in this movie.

Cinematography, costuming, art direction, Sebastian Armesto, Bardolatry … Yes, I think that’s all the good I have to say about this. For the rest, I have the notes I made as I was watching it.

Bol – er. The word I actually used at the time is considered pretty rude, especially in England (which was why I used it at the time), so I will look to the late great Colonel Sherman T. Potter for help. So: Horse hockey.

De Vere pulls Henry V off his shelf, then Julius Caesar, and Macbeth (!), and finally decides to give Jonson Romeo & Juliet as the first play – he has just finished Twelfth Night.

Bull cookies. (There is ample evidence that Macbeth was written specifically for James I.)

Sweet Nefertiti. I wasn’t sure whether I wanted to cry or vomit at that moment…

A death behind the arras.

That’s the funniest, most outrageously silly thing this piece of … work has propounded yet.

And at the end of the film the audience for the bookending production departs without a single pair of hands meeting in applause. Appropriate.

As an aside: I am extremely disappointed in Sir Derek Jacobi. The man who gave the world, among many others, my favorite Hamlet should not have deigned to be involved in this mess. And, too, if the complete lack of respect he was shown backstage is remotely realistic I’m appalled. 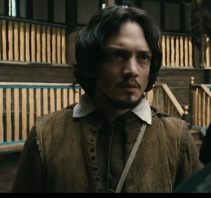 There are so many avenues I could chase down to demolish this movie – the fact that Ben Jonson wasn’t spending all his time hanging out at the Globe trying to sell Heminges his work, that there never was a slaughter of civilians on London Bridge (afaik), and – most glaring to me – that Kit Marlowe was not found in an alley … There are, in fact, so many that it’s hardly even worth it (but you know I’m going to touch on a few anyhow). That this was going to be a mare’s nest I knew going in. That in addition to a feeble attempt to discredit the historical Shakespeare it was going to be such a hash of misinformation about – to use their word – irrefutable history … I just don’t understand the intention behind the movie. It wasn’t historical. It wasn’t an exposé. It was, in some ways, a political drama, but about some alternate world – does that make it a fantasy movie? How can this be taken seriously as anything but pure comedy when it is so very wrong about so very many things (and when it goes so far over the top in depicting the actor Shakespeare as a stupid greedy 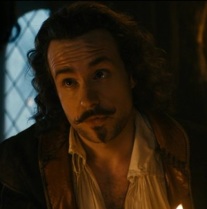 sot)? I’m not even remotely a Shakespeare or Renaissance scholar, merely an enthusiast – I prefer the title “geek” (A, not The).  And all I can think is … if I knew as I watched that so many things were dead wrong and within an hour of the movie’s ending through very basic research that so many more were off, how must actual scholars have felt? There must have been heads exploding in theatres internationally – not because of the nutty “Shakespeare didn’t write Shakespeare” nonsense, but because of things like seeing de Vere’s wife Anne, nee Cecil, throwing Ben Jonson out of their house after de Vere’s death – when Anne died sixteen years before de Vere.

A few more, which I either knew or found out within about an hour’s light research (meaning mostly Wikipedia):

It’s highly doubtful that de Vere was spending so much time hanging out watching the Lord Chamberlain’s Men when he had his own company of players, Oxford’s Men.

It’s highly doubtful that Ben Jonson was spending so much time hanging out watching the Lord Chamberlain’s Men, as he was usually writing for – and occasionally acting for – the Admiral’s Men at the Rose.

Thomas Nashe (here seen as the stout mug-bearing companion of Ben Jonson) might still have been alive to be hanging out at the Globe to see this purported Richard III, but probably not, since he died in 1601 at the latest and Essex (who did not, by the way, surrender in the palace courtyard) was executed in February of 1601.

It’s highly doubtful that Thomas Dekker (here seen as the skinny red-headed companion of Jonson) was hanging out watching the Lord Chamberlain’s Men, especially later since he and Jonson hated each other, and he also was mostly working with the Lord Admiral’s Men.

Kit Marlowe, wherever he was hanging out before his death, was not found in an alley. He was killed, irrefutably by Ingram Frizer, irrefutably in a house in Deptford, and was not ever dumped in an alley for the peasantry to find, buzzing with flies. The background of his murder is in dispute, but the facts, for once, are not.

Oh, and that fellow Essex killed through the arras? From a thoroughly documented and well-written article on Wikipedia:

On 23 July 1567 the seventeen-year-old Oxford killed Thomas Brincknell, an under-cook in the Cecil household, while practising fencing with Edward Baynham, a Westminster tailor, in the backyard of Cecil House in the Strand. At the coroner’s inquest held the following day, the 17 jurymen, one of whom was Oxford’s servant, and another identified as Cecil’s protégé the future historian Raphael Holinshed, found that Brincknell was drunk and instigated by the devil when he ran upon de Vere’s foil, causing his own death. Cecil later recalled that he attempted to have the jury find for Oxford as acting in self-defence rather than Brincknell committing suicide.

Oh, and as for being forced to marry Cecil’s daughter:

Oxford declared an interest in Cecil’s eldest daughter, Anne, aged 14, and received the queen’s consent to the marriage. She had been pledged to Philip Sidney in August 1569, and others had apparently sought her hand. Cecil was displeased with the arrangement, apparently having entertained the idea of her marrying the earl of Rutland instead. Oxford’s rank, however, trumped all else…

Midsummer - clearly the work of a pre-teen

And that’s as much time as I’m going to spend on correction.

If, as is posited here, some of the plays of Edward DeVere had already been performed at court (true) and then were later performed under “Anonymous” or “Shakespeare” – am I expected to believe that no one ever saw both? Hey – that Oxford kid wrote that fairy play when he was 12 – what are they doing showing it at the Globe as Shakespeare’s?

In Derek Jacobi’s Prologue – which was an interesting conceit, bookending the movie in the present, but

underscored the artificiality – the point is hammered home that William Shakespeare’s father, wife, and the two daughters who survived him were all illiterate.  The point being, apparently that obviously he must be as well. Which is spurious logic; it’s a little akin to saying that because my father couldn’t type and neither can my mother and brother, why then I must not be able to either (she typed).

All I can say in conclusion is that it was a beautifully filmed movie and deserved not only the Oscar nomination for costume but one for art direction. If it was being watched with the sound off, it would be a treat. With sound on?