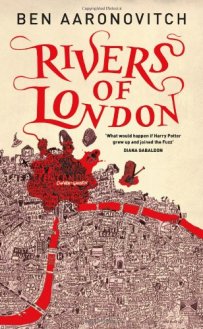 US title – Midnight Riot. Ben Aaronovitch has an excellent pedigree: he wrote two 7th-Doctor-era serials for Doctor Who, and has written DW novels which I will now have to seek out. And he seems to have been the first to send a Dalek up a staircase. Evil, evil man.

I’m becoming an audiobook voice groupie. Which is going to be a problem here, because the sequel to Rivers of London is not (legally) available in the US. Mia Michaels, judging on So You Think You Can Dance, coined a word I’ve been using ever since. The spelling is debatable, but it is, roughly, “gorgeois” – pronounced “gor-zhwah”. That word, for me, is a very good descriptor of Kobna Holdbrook-Smith’s narration of Rivers of London. (Hey, he pronounced “chaise longue” correctly. If for nothing else I love him for that – and there’s plenty more to adore.) He has a deep, dark, dusty voice, and reads aloud like a dream. His character voices are stupendous. London being the (insert something less clichéd than “melting pot” here) that it is, KHS has a variety of not only British regional but international dialects to deal with: male, female, other, Scots, Cockney, British Received, Nigerian, more – all are wonderful. It’s lovely to hear him switch from what may be his own voice, here the voice of Peter Grant, to the dry light patrician tones of Nightingale – equally natural, equally fluent, and so different from the sound of Peter that it could truly be a different speaker. There is nothing between Kobna Holdbrook-Smith and the experiences he tells of, no evidence whatsoever that the words he speaks were ever such dead things as print on a page. 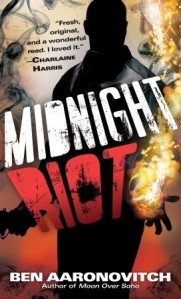 The writing doesn’t hurt in that endeavor. Ben Aaronovitch’s style is utterly natural and conversational, perfectly in keeping with the first-person voice of young Peter Grant, his main character. It’s no young adult book – the “f-bomb” is dropped liberally, for one thing, and then there’s the violence – but it is the story of the beginning of an apprenticeship, of the opening up of a strange, unsuspected world within the common mundane. Peter’s world is, if not turned upside-down, tilted at a startling angle, and everything changes. And then changes again. Then gets a little stranger. I loved that he took every part of it, from the very beginning, back to his classmate and sort-of-partner Lesley to talk over, not worrying (much) about whether or not she would believe him. I think I’m in love with Peter Grant (and Chief Inspector Nightingale), but that could just be the influence of The Voice. 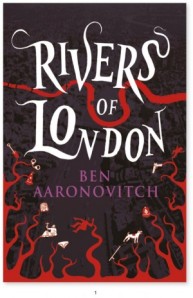 The story does a fascinating job of limning the difference between the sort of person who becomes a “copper” and the rest of us. I think it was a commercial for some possibly short-lived network series that explained that most people run away from trouble, while first responders run toward it. Here this is underscored, especially in the first chapters: Grant and May, the brand shiny new PC’s, are caught up in the tail end of a hideous incident, and wind up standing shaking, covered in blood not their own, faced with a dead family and a scene of horrendous violence – and they field the situation. And come back for more. Most people (I) tend to want to avoid this sort of thing, and having been unable to avoid it once would do absolutely anything to avoid experiencing anything like it again….

I love how this world, this alternate London, was built. There isn’t so much a conspiracy of silence as in, say, Harry Potter, where the wizarding world goes out of its way to keep muggles safe ignorance. (I love that Harry Potter exists in Peter Grant’s world. It will be great fun to keep that in mind going on with the series, to try to spin it to determine what if anything the Alternate Jo Rowling knew about real wizardry.) In this London, in this world, it’s more a matter of the muggles not wanting to see what they can’t cope with (or not having the ability to see it), and the wizarding world simply staying rather quiet and out of the way. I love the skepticism, giving way grudgingly to acceptance, of just about everyone; I love Peter’s attitude toward the situation in general and his situation in very much particular. 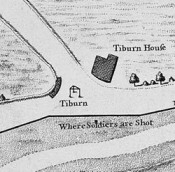 I love how the British title – so much better than the American – is brought to life. The voice of Mother Thames is wise and remarkably feminine and beautifully accented, and the tale of how she became Mother Thames is a small gem of storytelling. And then we go to meet Papa Thames. It’s the sort of storytelling I just want to hug to myself and not let go of. And – bonus – I learned a bit. Going on to listen to A Time Traveller’s Guide to Medieval England, I could be a bit smug as the author talked about executions at Tyburn.

I loved just about everything about this book. I loved the revelations about what was going on – something which could have been truly awful in different hands, but which was suspenseful and horrifying here. I loved not knowing whether I could trust Aaronovitch with characters’ lives. I even loved Peter’s ambivalence toward Toby – and that’s not like me. I can’t honestly think of anything I didn’t like. I can’t wait to get my hands on the second book (and the third, and so on) – but I wish, I deeply wish, that the audio book was available here. It just won’t be quite as much fun without KH-S.

But I have faith that it will be fun.