The Turn of the Screw – Henry James 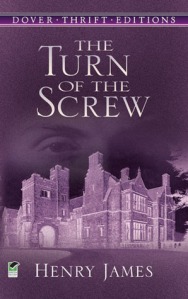 A bit ago I managed to get back to my seemingly endless quest to catch up on Heather Ordover’s Craftlit, and listened to the end of “The Legend of Sleepy Hollow” (very cool), followed by The Turn of the Screw, by Henry James. It’s odd listening to the craft/personal portion of the podcast at six years’ remove (six! I’ll never catch up!), as there is now and then something I’d love to chip in or chime in or pipe up about and it would be rather silly, if not completely irrelevant, at this late date. But I can, and do, still enjoy the podcast.

The Turn of the Screw was … strange. I wasn’t as in love with it, or with Henry James, as Heather Ordover was. I was almost as enthusiastic about the narrator as she was, though; Nikolle Doolin was indeed pretty fabulous, and it will be well worth seeking out her other projects.

But the book … Were there ghosts or weren’t there? What was it that Miles did at school that the headmaster wouldn’t put into words? Just how unreliable is the certainly unreliable (never named!) governess narrator? In the end, none of it is resolved; in the end, what does happen is shocking and unsettling.

It was interesting listening to this with Heather Ordover’s guidance. I’m not sure I would have interpreted some of it the same way without her bookending commentary, and I didn’t entirely agree with her; I didn’t see the earlier

chapters, at least, as quite as sexualized. The governess was a silly dreamy impressionable creature, very young; I didn’t read her relationship with the children (or the ghosts) as being loaded with any sort of sublimated lust or longing. That with Mrs. Grose, maybe… (The later chapters, including a comparison the governess makes about being alone with Miles, though – yikes.) However, with that critique in mind, suddenly half of the phrasing became modern double entendres; everyone was “putting it to” everyone else and so on… The language has rather changed.

One thing I did see throughout was a pattern of the governess making people do things against their will, either playfully or very much the opposite. She seemed to go through the book forcing the children and Mrs. Grose to say and do things they would rather not – all because she, the 21-year-old gently reared lady, knew best. Perhaps it’s one reason she was so unhinged by the ghosts – she could do nothing about their behavior.

I didn’t find it as creepy as apparently everyone seemed to. The last chapters come closest, of course, as the situation becomes more intense (as the screw turns), but earlier I think her reactions to the apparitions were so peculiar that I was completely distracted from worrying about what might be hovering at the top of my own stairs in the dark. She lies about them, she is excited about them, she havers over them, she has energetic one-sided discussions with poor Mrs. Grose about them; she is afraid, but her main fear seems to be because she has leapt – like a startled kangaroo – to

the conclusion that the ghosts are there to harm the children. And then she begins to wax ecstatic every time the children do anything wrong, as this is to her proof that she’s right, and the ghosts are corrupting them. She has no doubt from the beginning, on evidence even more dubious than that supporting all of her other conclusions, that the children not only see the ghosts but communicate with them.

The governess has strong opinions, and the reader has no choice but to accept them, as often as they are repeated. Mrs. Grose is her dear friend and confidant – no matter that the poor lady is of a different class and station and pattern of mind, the governess overlays her with a new image and believes in it utterly. The children are beautiful, adorable, beautiful, good, beautiful, wonderful, beautiful, perfect – anything negative is the fault of those blasted apparitions. Her employer is the epitome of gentlemanly gentlemen, and his very absence and lack of communication is obviously – to her – the clear sign of his deep faith in her, and surely he is but a step away from loving her as she loved him from their first meeting. She herself is kind of terrific, she tells us; looking back at the girl she was she is all kinds of impressed with herself. Words like “magnificent” are rarely used in first-person narratives in referring to the narrator; here, they are. I don’t like this girl.

A small note, or perhaps a ‘little’ one: nearly every mention of the children involved the word “little”. In one brief chapter (the last, to be specific), she talks of:

In one of those sentences “little” is actually used twice. I know this is a symptom of the book’s era, but … it gets old.

In the end, the book (novella, really) said a great deal without ever really telling much at all. The introduction on online-literature.com makes comparison between the book and a heavy fog, and that’s perfect. In a great many areas the English language has suffered in latter years – but in many ways the tendency toward brevity (in everyone but me, of course) is not one of the detractions. I mean my goodness the sheer number of words thrown into any given sentence – in pure Victorian fashion – is impressive, and obfuscatory. (I just can’t pass up a chance to use that word. Even if I made it up a little.)

Like Loading...
This entry was posted in books, literary fiction and tagged Ghost, Governess, Henry James, Turn of the Screw. Bookmark the permalink.

1 Response to The Turn of the Screw – Henry James