All Men Fear Me – Donis Casey 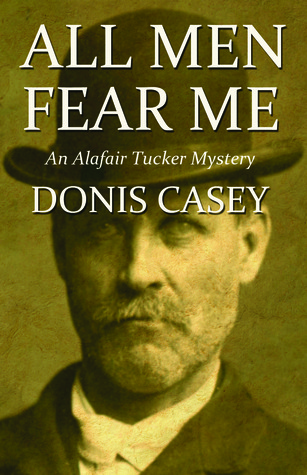 All Men Fear Me did exactly what I think the authors and publishers hope books will do on Netgalley: it made me love the author and look forward to reading everything she’s written. It won a fan. I loved this book from the moment I saw the character list: there’s “Gee Dub, age 20, a college student” … “Charlie, age 16, looking for action” then three younger daughters of the family, “a beauty”, “a tomboy”, and “a handful”.

I hate coming in in the middle of a series. Authors so often do a terrible job of the difficult task of balancing the needs of new readers with those of the folks who have been around since the beginning, and from experience I normally pass on Netgalley books when I see “book 2” or “the fourth book in the series” or that sort of thing. I must have missed the fact that this is the eighth book in the Alafair Tucker series, and I’m so very glad I did. Donis Casey beautifully avoided all the pitfalls and just left me really, really happy that there are seven earlier books I can’t wait to get my hands on.

I loved the language. By which I mean the curses – I need to incorporate “Well, I’ll be go to hell” and “Shoot fire” into my speech (hey, people already think I’m weird, might as well enjoy myself), and I might also find myself using the threat “I’ll pull his lungs out and make balloons out of them!” – and also simply the prose. It rings utterly true for 1917 Oklahoma, and and the authenticity goes deep enough that if something pings my radar, I’m going to trust Donis Casey. She knows what she’s doing, and I can relax into it. I love that.

What a story. It’s right at the beginning of America’s involvement in WWI, so we have gone from isolationism to rampant anti-German “patriotism” – so alarmingly like the tide of anti-Muslim feeling after 9/11 (and since). And one of Alafair’s sons-in-law was born in Germany. It gets outright terrifying.

And also surprisingly frightening is “Old Nick”. Is he an evil man in a bowler hat who glories in calling himself by the devil’s nickname? Or is he actually the devil? The immediate interpretation of the book’s title is that yes, indeed Old Nick is one to be feared … but then there is this WWI propaganda poster: “I Am Public Opinion: All Men Fear Me”. The “Knights of Liberty” – think the KKK, with a wider range of targets – are frightening in their xenophobic ignorance … but most frightening of all is the fact that both the xenophobia and the ignorance were actively encouraged by the government. An appeal to buy Liberty Bonds, from the Tulsa Daily World, 1917: “We need more loyal and less ‘thinking’ Americans… Are you an American?” Just typing that sends chills up my back. It’s like an over-the-top science fiction novel about some paranoid and petty tin-pot dictatorship.

I love Alafair. It’s that simple. The fierce mother; the intelligent and inquisitive woman; the contented frontier homemaker; the woman who wants to help the prostitutes her mother takes her to charitably call upon but who is simultaneously terrified that someone will see her near that house. (“Besides, the Lord wants us to try. He don’t care if we succeed.”) I love her, I love her family, I love the setting, and I want to read – or listen to; I have discovered that the audiobooks (read by Pam Ward) are outstanding – all of them. And more. If you know what I mean.

On a lighter note, here is a cooking tip I’ll have to try: “Her father insisted that a pancake was not ready to flip until exactly twenty bubbles had formed over the top. Not one more or one less.”

I received this from Netgalley in exchange for an honest review, which I hereby set down with thanks.

Like Loading...
This entry was posted in books, mystery and tagged All Men Fear Me, Donis Casey, mystery, NetGalley. Bookmark the permalink.