I did some reflecting in my (review? Essay? Piece?) thing on Emily of New Moon about why I don’t love Emily as much as Anne, why I haven’t read the trilogy in many years when I won’t let a year go by Anne-less. Emily Climbs clarifies the matter a bit more.

There is a great deal more cynicism in Emily’s world than in Anne’s. I was astonished reading the first chapters at Emily’s perceptiveness – and, like any perceptive person moving among the unimaginative and less incisive, she has, very young, developed an almost inevitable shell of jaded sarcasm. Mr. Carpenter doesn’t call her “Jade” for nothing. I don’t class myself with Emily (or Anne) in terms of intelligence or sensitivity, but still, I am of their ilk. Emily weeps over David Copperfield – oh, how I understand that. Aunt Ruth (notof the race that knows Joseph) upbraids her for the tears – crying over people who don’t exist! And, with Emily, I protest that of course they exist. In a meta moment, Emily tells her they are as real as Aunt Ruth is – and so they are, of course. But Ruth is part of the force that demonstrates daily for Emily how flat most people’s lives are – none of the terrible deep dark moments for them, but also none of the marvellous highs – nor even the small secret pleasures a combination of being able to see and being able to appreciate can bring. Aunt Elizabeth is Marilla without the sense of

Queen Alexandra and her dog collar

humor, and with a solid layer of scarring – from the accident with Jimmy to, probably, the fact that she is single in a time and place where spinsterhood is a wretched condition – to prevent most softer emotions … Aunt Laura has her moments, is loving and more willing and able to share it, but is prim and easily shocked. Uncle Jimmy is wonderful – but not comfortable, always; there is the occasional glimpse of what he might have been, of what was all but killed in him by the fall into the well, and you never quite know when it will make an appearance. Dr. Burnley has gone from bitter and cynical to … rather less bitter and cynical, and somewhat excessive. Aunt Ruth … Were I Emily, I think of the two conditions going to school in Shrewsbury, that I would lodge with Aunt Ruth and that I could not write any fiction for three years, the Aunt Ruth half would be worse. Fiction will still be there when it’s over; the scars Aunt Ruth might leave will linger forever. Writing fiction is a passion which would not die in three years; living with Aunt Ruth would be torment. And so it was.

The idea of the wild, dark vein that exists here but not in most of the rest of L.M.M.’s work intensified as it went on. Emily has a mean streak – not very big, and not well-developed, but expressed now and then in

sarcasm and cutting remarks which send people off bleeding and vowing never to mess with her again. And she has an understanding for darkness; she hears goblins as well as wind spirits, and the thought is inescapable that she could have easily gone either way. Had she been raised by Uncle Wallace … I can see her at the age she is ending the trilogy, with a career as a viciously funny writer, slashing more tender folk to shreds and making millions doing it, but treasuring more the string of scalps at her belt than all the money.

I think I was too young to get hold of all of this the last time I read Emily, and so 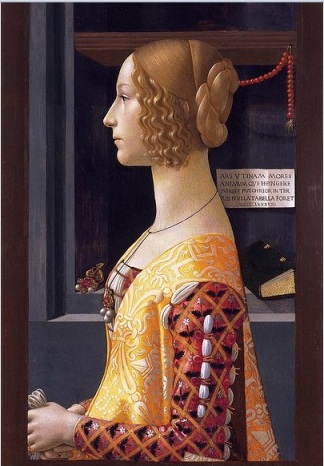 these three books were not as enjoyable as the sweet and lovely place that is Anne’s Avonlea. Anne has her moments – but compare her handling of Josie Pye to Emily’s dealings with the evil Evelyn Blake. Anne wins by taking the high road, and Josie Pye, Pye-like, would never recognize her victory; Emily routs Evelyn foot and horse and leaves her bleeding in the dust.

I loved this tale of the teenaged girl beginning to make a mark for herself. The tangled webs, to reference another LMM work, are beginning to tighten, but they aren’t too heavy yet; the future is still completely unwritten, or seemingly so, and hope is high. There is a savor of the time and place, not so very long ago or very far away except in everything that matters; good companionship; wonderful writing; pathos in its best sense and moments that made me laugh aloud. Middle books are often maligned and disregarded things, but this is by far my favorite of the three. I’ll never again be able to leave Emily out my list of the Montgomery girls I love.

My review of Emily’s Quest