I Don’t Know How the Story Ends – J.B. Cheaney 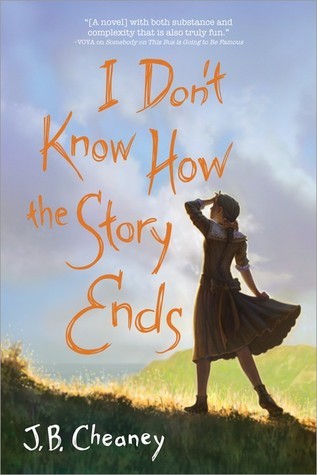 Earlier this year I was in the middle of a streak of novels set around WWII; now I’ve moved back in time to WWI. In I Don’t Know How the Story Ends, thirteen-year-old Isobel, with her hellion little sister Sylvie, is dragged by their mother to California. Their father is in France, having felt driven to volunteer as a field surgeon, and their home in Seattle was beset by rain until their mother couldn’t take it any more and fled South to sunshine and her sister.

And Isobel is not happy. She’s miserable without her father, and now … fine, it’s sunny, but with the sun comes her aunt’s stepson Ranger, and no one will allow her to just be miserable alone as she wants. Because Hollywood is being born, and Ranger, she discovers, has caught the fever and is making a film – and he wants her in it.

I liked it. I liked it a great deal. There was a bit of a level of complexity I didn’t expect in Isobel’s relationship with her parents. I liked the children’s love-hate relationship with each other. I loved the setting. I wish this book had been around when I was thirteen – I might have gone into film-making.

Like Loading...
This entry was posted in books, Children's/YA and tagged cinema, I Don't Know How the Story Ends, J.B. Cheaney, NetGalley. Bookmark the permalink.