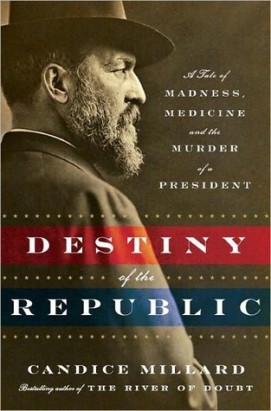 If you look up “delusional” in the dictionary, there’s a full–page, full–color picture of Charles Guiteau.

And if you look up “unfulfilled potential” in my personal dictionary, with this book James Garfield’s picture took the place of JFK’s.

President James Garfield is one of those Commanders in Chief no one seems to know much about. By which I mean I never knew much about him, until PBS aired an hour-long documentary about his death, which because of its proximity also took in his entire presidency. (But seriously, the name “Garfield” is almost certainly going to mean “cat” to most people, not “president”.) I was so utterly horrified by the story – and fascinated, in a look-how-the-train-wreck-twisted-the-metal way – that I went looking for this book.

The short version: it’s an excellent book about an extraordinary man, and with a first-rate narration. It’s a great book. Depressing, horrifying, heart-rending, and often nauseating – but really great.

Being me, there’s a long version.

I could spend a couple thousand words just on what might have been had Garfield lived and served out a full term, or probably two. He was kind of amazing – how is he so unknown? “Big-hearted and cheerful, Garfield was nearly impossible to resist. Throughout his life, he was just as likely to give a friend, or even a determined enemy, a bear hug as a handshake.” He deserves a far greater memorial than an orange cartoon cat. This book is a good beginning.

A big part of this story is the literally skin–crawling discussion of what anti–antisepsis medical practitioners practiced… Suddenly time travel is even less attractive. Never mind a dearth of antibiotics, Reconstruction-era racial strife, outhouses, and a complete lack of women’s (or children’s) rights – this exploration of how a bullet wound was treated in a man who held the highest office of the land and could, theoretically, expect the best medical care possible… this was enough to keep me from ever contacting Max and company in Jodi Taylor’s St. Mary’s series with a view toward tagging along on a trip backward. Whatever I might sometimes feel about the deficits of this day and age, thank you, I’d like to stay here please. 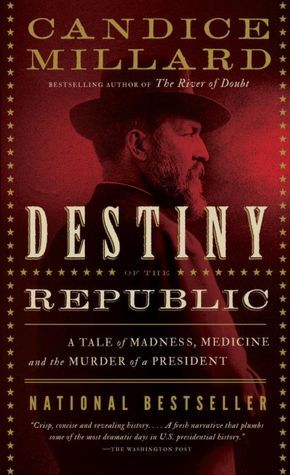 Because here, and now, no one would need to consider inserting a really bright light bulb into my body to find a bullet. No one would keep feeding me, even after the pattern was established that I would only shortly vomit everything back up (which must have been hellishly painful to the wound on the back, for starters. No one would pour fermented mare’s milk down my throat, or inject beef broth into other orifices… No. Every time I start being wistful about the manners and morals and other shiny things about any past age, I’ll think of the stubborn insistence of so many medical practitioners that hand-washing wasn’t just unnecessary but probably harmful to patients, and … no, really, I’ll stay put.

(However, the Doctor has the TARDIS. And he’s the Doctor. I’ll go with him anywhere, anytime.)

I haven’t been fond of Robert Lincoln since reading <I>The Emancipator’s Wife</i>; that book’s description of his treatment of his mother – who, I grant you, was a couple of McNuggets shy of a Happy Meal and, shall we say, challenging to deal with – left me fuming and heartsick. Now I learn that after Garfield was shot he rushed out in his carriage and picked up Dr. “Filthyhands” Bliss to come and see to the wounded president; he had tried (unsuccessfully, it may not be entirely fair to remind the reader) to save President Lincoln. Without the ham–handed (filthy–handed) efforts of this exemplar of the medical profession, the consensus is that Garfield might would surely have lived. Even apart from the academic or creepy connection Robert Lincoln had to not one, not two, but three assassinations – nope. I still don’t like him.

So many good, forward–thinking doctors tried so hard to stop Bliss … And were shouted down. Or just ignored.

And my mind continues to be blown that the Secret Service wasn’t officially assigned to protect the president for another twenty years. It’s a little shocking that even more incidents didn’t occur.

However, it also
– forced Chester Arthur to become a better man, and a good president (with a lot of help from Julia Sand
– brought the country together more than it had been since before the Civil War
– helped finally quash Roscoe Conkling, who needed quashing so very badly
– raised real awareness that no, really, germs are real and can be prevented from killing a patient if only certain levels of cleanliness are observed
– drove Alexander Graham Bell to develop an invention which, while (because of Bliss) it was unable to do a thing for Garfield, would go on to prevent discomfort and even death for thousands

I find it hard to swallow that Garfield’s death might have benefited humanity more than the rest of his life might have … but it might be true.

One quote I made note of: “…traveling from town to town and asking for votes was considered undignified for a presidential candidate…”

I weep softly for the wisdom of a lost age.