A Scandal in Scarborough – Stuart Fortey 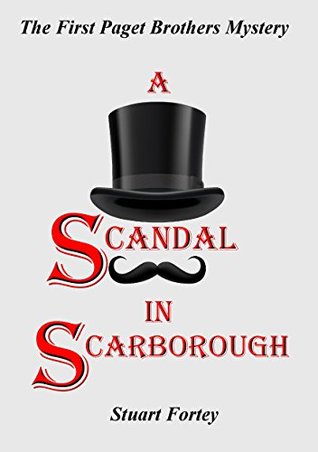 It is a pretty cover, though

What a strange book. What a very odd book indeed. The premise is that Sidney Paget is the illustrator of the Sherlock Holmes stories in the Strand (true), a job he received accidentally – the publishers intended to hire his brother Walter (also true). Benedict Cumberbatch’s Sherlock can blame Sidney for the deerstalker. Scandal in Scarborough begins with Sidney trying to help Walter stabilize a bit with a trip to the seaside, because, whether Walter became unbalanced after the wrong brother was hired or was always a bit loopy, he is most definitely a little unhinged now. It probably doesn’t help his state of mind that Sidney uses Walter as his model for the Great Detective (which he apparently denied).

Whatever the cause of the loopiness, Walter is compelled to fling himself into an investigation of a missing man he reads about in the newspaper. Having been used as the image of Holmes, being recognized by all and sundry as Holmes, he is under the impression that he can solve the disappearance. Sidney, naturally, tags along to try to contain him. He does not do a very good job, and is sucked into the sorry excuse for an investigation – though I suppose the “make assumptions and ask kind of random questions” style is rather accurate to what Doyle wrote, without the genius Holmes supposedly had.

These two brothers … Sidney proudly proclaims that before he illustrates a story, he actually reads the story. I marveled. I don’t know, maybe habits among artists were different then, but … truly, this is nothing to brag about. It’s common sense. He reproves his brother for playing detective, then goes off and investigates things on his own in hopes of being able to show Walter up, and then drags his feet about whether they should be involved, then spends hours trying to decode a message which … well, really, if he actually did read all the Sherlock Holmes stories as he claimed he ought to have cleared it up long before. And both he and his insane brother enjoy the whole thing far too much for a case in which bodies begin to pile up, including that of a friend.

“In my heart of hearts I did not merely want to rein in Walter, I wanted to surpass him. I would decode the message and solve the crime – not just to bring my brother down a peg or two, which it undoubtedly would do, but to become myself the man of the moment, the hero of the hour…”
– Ass.

The writing became a little awkward at times, though it seemed to stick to its period pretty well. Still, the lighting fixture swaying above the dancers in that one chapter was a chandelier, not a candelabra. Sidney lapsed into visions or nightmares or something every now and then which reeked of sloppy writing more than anything else – unless they were supposed to demonstrate that both brothers needed psychiatric help. And the book also suffered from RealiltyShowItis – that tendency to, now and again, recap everything that has gone before for the inattentive reader.

I have to give credit where it’s due for one thing: “Punch took up his slapstick”. I never heard where slapstick comedy got its name before – so thanks for that.

Like Loading...
This entry was posted in books, mystery and tagged A Scandal in Scarborough, Holmes pastiche, LTMG, mystery, Stuart Foley. Bookmark the permalink.

10 Responses to A Scandal in Scarborough – Stuart Fortey